John Collison of Stripe speaks about the trends of shifting from using physical cash to digital money. Video: EY 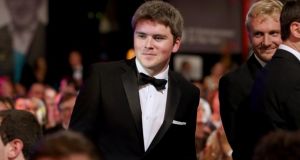 John Collison of Stripe who was the International and Overall winner at the awards ceremony last night in Citywest last night. The event took place in front of an audience of over 1,500 people and was broadcast live on UTV Ireland and UTV. Photograph: Maxwells 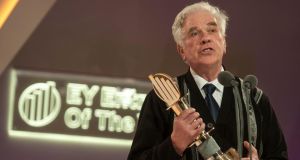 Fr Peter McVerry, who won a special award for his work with the homeless at the EY Entrepreneur of the Year Awards. Photograph: Dave Meehan 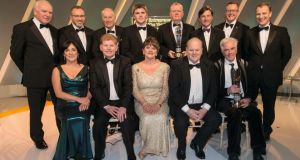 John and Patrick Collison, the boy wonders of Irish technology, have won this year’s EY Entrepreneur of the Year award.

Their online payments platform Stripe, launched only five years ago, was recently valued at $5 billion (€4.6 billion).

Similar to PayPal, it accepts credit and debit cards for merchants who have not taken them previously, charging a small fee per transaction.

It now processes billions of dollars a year for thousands of businesses such as Kickstarter, Instacart and Salesforce, and recently announced a strategic partnership with credit card giant Visa.

The Tipperary brothers live in San Francisco, where Stripe and its 300-strong workforce are based.

“Having Stripe recognised by the community that helped us exist in the first place is an honour,” Mr Collison said.

“Even being among the 24 finalists would make you nervous given the calibre of the field.”

Asked about the company’s future plans, he said simply it’s about building a long- term, sustainable business while maintaining the energy of a startup.

In addition to being selected as the overall winner of EY Entrepreneur of the Year award for 2015, Stripe also scooped top honours in the Best International Entrepreneur category.

Jack Dobson of Dunbia, one of the largest meat processing firms in the UK and Ireland was named EY Industry Entrepreneur of the Year, while Pádraig McBride and Donald Fitzmaurice of mobile marketing company Brandtone picked up the award for Best Emerging Entrepreneur.

As overall winners, the Collison brothers will go on to represent Ireland at the World Entrepreneur of the Year awards in Monte Carlo next June, where they will compete with more than 60 leading entrepreneurs from across the globe.

“Stripe has disrupted the world of online payments, growing at an unprecedented pace for an Irish company in an industry that had previously been dominated by major players in the market,” said Anne Heraty, chairperson of this year’s judging panel.

Kevin McLoughlin, partner and head of the EY Entrepreneur of the Year programme, said: “This year in particular was very difficult for the judges to select a winner. Each year, we are seeing more and more entrepreneurs come through the programme that have already scaled their business to an international level and Stripe are a stellar example of this.”

Fr Peter McVerry, founder of the Peter McVerry Trust, the housing and homeless charity, received this year’s Special Award for making “a profound contribution to the island of Ireland through his entrepreneurial vision, innovation and commitment to excellence”.

Accepting the award, Fr McVerry said:“It is to the shame of our nation that we have a rapidly growing homeless problem.”

Unlike the many entrepreneurs present, he said, his objective was to go out of business, “to end homelessness”.

1 Explainer: what is the row about SF’s multinational tax plan?
2 Pensions: Estonia plans to unleash a potential €4.85bn on economy
3 Banks withdrawing from ATMs – another failure of regulation
4 Getting out from under ‘never-ending’ Celtic Tiger debt burden
5 Brittany Ferries ends Cork-Santander route
Real news has value SUBSCRIBE