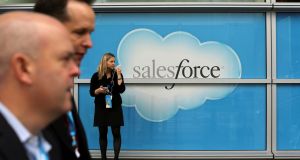 CoderDojo and the Royal National Institution for the Blind have teamed up to unveil a series of accessible Dojo events in the UK.

The first event took place at the Salesforce World Tour Event in London, with 24 young people working in teams mixing students with visual impairment and sighted children on a puzzle-focused project based on the BBC Micro bit, an ARM-based embedded system designed for computer education.

“We were given the challenge about a month ago and we put this together. The plan is we’re going to organise a series of accessibility dojos on the back of this,” said Johnny Claffey, one of the organisers behind the event. “We’ll have one in London, we’ve got one in Liverpool. All our future plans are pretty high tech. We’ve learned a lot in the past couple of weeks.”

The accessibility Dojos are being organised in partnership with Thomson Reuters, Salesforce and RNIB.

The CoderDojo movement is intended to offer every child the opportunity to learn how to code and be creative with technology.

“Salesforce is incredibly committed to diversity, so we have chosen to highlight diversity around coding and ensuring every single child has the opportunity to learn to code. That includes the visually impaired,” said Salesforce.org Vice President of EMEA Charlotte Finn, adding that it was an area where developers hadn’t historically incorporated as much as necessary into development programmes.

CoderDojo was founded in 2011 by developer James Whelton and Bill Liao, with the first event taking place in Cork. Since then, the movement has grown worldwide, with more than 850 Dojos in 63 countries.

Mary Moloney is the global chief executive of the CoderDojo Foundation, the organisation Mr Whelton established in 2013 to help grow and develop the movement.