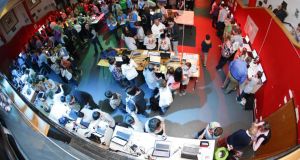 The event, which will take place on June 13th, allows participants in CoderDojo, which is open to children aged from seven to 17, to show off their skills and the projects they have created, from websites and apps to Scratch projects, HTML and other advanced coding languages.

It’s a mark of how successful the event has become that this year it is moving from the Helix in DCU to the RDS, the home for the BT Young Scientists Competition every year. Up to 500 projects are expected to be shown off at the event, and organisers are predicting it will grow even bigger next year.

“Sometimes you get what you wish for,” said cofounder of Coolest Projects Paul Phelan. “The scale and growth has been phenomenal.”

Now in its fourth year, Coolest Projects started as a showcase of 16 projects in Intel.

“It was a pilot really,” said Mr Phelan. “The following year it grew to 60 and we moved to DCU.”

Last year, there were 250 projects taking part. The event now includes participants from around Europe, with about 10 per cent of projects from CoderDojo members outside Ireland.

“We never anticipated 3½ years ago that we would be holding the event in the RDS,” said Mr Phelan.

They have this vision that you don’t foresee when you’re teaching them throughout the year,” said Mr King. “I love seeing the children see problems that they then use what they learn in CoderDojo to solve.”

One of last year’s winners was Niamh Scanlon, who created an app that showed the location of all the e-car charging points around the country on a map, if they were currently in use and if so, how long for, all in real time. The app also provided directions to the charging points.

She worked with the ESB to gather data for the app, which she designed for Android phones. She is also working on an Apple version, but the Android app is expected to get into the Play Store soon.

“I decided to make an app out of it because I thought it would be helpful for people with electric cars,” she said. “My dad really loves electric cars and wants to get one. He was saying wouldn’t it be great if I could see if someone was using the charging points.”

The event also gives the Irish CoderDojo and Coolest Project participants the chance to see other projects.

“I’m really looking forward to this year because it’s going to be even bigger,” she said.

1 State’s biggest landlord records 30% rise in rental income
2 Irish tourism must also help itself to survive the pandemic
3 What will the office market look like after the great remote working experiment?
4 ‘Saudi Arabia is where the opportunities will happen in future’
5 Facebook agrees Irish wind farm deal with Brookfield
Real news has value SUBSCRIBE