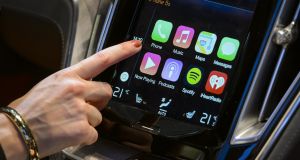 The centre stack is the area around the radio in most cars. It’s also where the touchscreens that are fast becoming standard features in new cars are located. But this is not a battle about physical space. It’s a battle to establish whose “brain” will control the touchscreen that provides drivers with information and entertainment on the move.

In the red corner is Google’s Android Auto. In the blue is Apple CarPlay. Both systems take in-car communication well beyond what most people are familiar with from their Bluetooth connection. Customers want seamless integration of their mobile devices with their cars; Google and Apple are keen to provide it.

Car manufacturers can’t seem to decide whether Google and Apple are friends or foes. Seat boss, Luca de Meo, however, has a pretty clear opinion. “They recognise that an automobile is not the last vestige of the old economy, as some tried to convince us a couple of years ago, but that cars will be a big and important part of the internet of things,” he told the recent Automotive News Europe Congress in Munich.

Car manufacturers would prefer to retain control of the centre stack for exactly the same reason as Google and Apple want it. It is a valuable source of customer information and ripe for monetisation.

There are over a billion cars on the road today. That’s a lot of moneymaking opportunity. Add into the equation that self-driving cars will free motorists to spend on the move and it’s easy to see why the centre stack is strategically significant. In short, it’s the gateway to selling services within the connected car environment.

However, the battle for the centre stack is just one element in a much bigger challenge facing the motor industry: how to keep up with the developments that are changing not only how people interact with their vehicles but how they think about mobility itself.

Software is both backbone and king in this brave new world, and although carmakers have huge technical know-how when it comes to hardware, the majority do not have the resources to take on the big software companies. The mobility revolution is happening so fast that it needs big, cutting edge software teams to drive it.

Ian Robertson, head of sales and marketing for BMW, says the next 10 years will involve more change in the car industry than was seen in the previous 100.

Cars are rapidly becoming complex multitaskers needing vast amounts of processing capability to handle everything from real-time traffic information to high-resolution graphics and self-driving. This has seen chip manufacturers such as Nvidia, traditionally more at home in the gaming sector, becoming involved with the auto industry. Both Audi’s virtual cockpit design and Volvo’s autonomous car pilot programme use Nvidia technology.

“The connected car needs a modern software platform that’s built for connectivity,” Patrick Brady, director of Android Engineering told The Irish Times. “That’s what will transform the car from being merely connected to being truly smart. Providing data or information alone is not enough – for example, many cars today have live traffic information that shows on a map, but a modern connected car should automatically suggest alternative routes based on that live traffic.”

The real value in the auto sector is shifting inexorably from hardware to software. On top of this, a growing number of people are no longer wedded to owning a vehicle. They prefer the flexibility of car-sharing arrangements instead. Ford and General Motors are already in this space in the US, while BMW has recently unveiled its ReachNow initiative for peer-to-peer vehicle sharing. Closer to home, Toyota entered the Irish car-sharing market this month with the launch of Yuko.

To a growing extent they are doing this by embracing “copetition” – the corporate equivalent of keeping your friends close and your enemies even closer. Hence the relationships with the likes of Google and Apple. Partnerships and acquisitions have also moved up the agenda. In 2015 archrivals Audi, BMW and Mercedes joined forces to buy Here, Nokia’s mapping service, for $2.8 billion (€2.47 billion).

The entry barriers that have protected the auto industry for decades are crumbling, making it open season for mobility entrepreneurs. These days electric vehicle maker Tesla is a household name. Yet it’s just a teenager at 13 years old. Equally familiar is the international transport network company, Uber, which was only established in 2009. An indication of what’s still to come is evident in that in 2015, over 50 per cent of all start-ups in Silicon Valley had the word “mobility” in their title.

The motor industry has traditionally moved at a sedate pace because of the time it takes to design and make a vehicle. Cars also need a long lifecycle to recoup the investment costs involved. By contrast, the consumer electronics companies largely driving the transport revolution are whizz kids changing product every few months.

Car manufacturers are responding by splitting hardware and mission-critical software operations into separate entities and allowing each to move at its own speed. They are also endeavouring to stay on trend by broadening their knowledge base. This is reflected in an eagerness to hire experts in fields not previously associated with the motor industry, such as machine learning and telecoms.

Adam Jonas, head of global auto research at Morgan Stanley coined the word “autopia” to describe his vision of a futuristic transport environment. He believes that Google and Apple’s deep pockets are well capable of producing electric vehicles or driver-less pods as the market demands. But crucially, he says they think differently. Carmakers see their market as 80 million vehicles a year. Silicon Valley sees the trillions of miles these cars drive annually and how these miles can be converted to money. “Mobile and tech disruption could rewire the economics of driving and overhaul the car industry, “ Jonas says.

Industry analysts of a pessimistic disposition believe some car brands will disappear completely if they don’t make a successful transition to the digital future. There is also a view that Google and Apple have yet to reveal their real intentions towards the motor industry. Factor in that artificial intelligence may ultimately provide us with cars that know how we “feel” and respond accordingly, and there are interesting times ahead for the motor industry, whatever shape it takes.

Android Auto and CarPlay have given carmakers the headache of deciding whether to adopt one system, both systems, or use a combination of proprietary and bought-in technology. Most are hedging their bets, as the last thing they want is someone making a car-buying decision based on what phone they use. Looking on are companies such as Toyota, which is going it alone.

Dashboard systems are a work in progress. Up to now having access to Android Auto meant either buying a car with the capability built in or paying for a retrofitted unit.

At Google’s I/O 2016 gathering of developers in May, the company announced that motorists will soon be able to use Android Auto on their smartphones, no in-car touchscreen required.

However, there are those who feel these systems promise a lot more than they currently deliver. In response Patrick Brady, director of Android Engineering, said this was partly down to safety. “Our goal is to provide drivers with the information they need in a safe and seamless way,” he told The Irish Times.

“Some of the popular apps on our smartphones today just aren’t safe to use while driving . . . safety always comes first.”

Adding functions is not that simple, as tasks have to be capable of being done very quickly while driving. The US transportation department recommends that no actions should take more than two seconds. This rules out scrolling through lists and requires modifications such as making fonts bigger and maps less complex.

1 Admission of mistake in Oxford vaccine dose raises doubts over reliability
2 Cliff Taylor: Deal or no deal we are now heading for a hard Brexit
3 Move to EU or face disruption, EU Commission warns City of London
4 Irish Life fund pays €49m for 94 Dalkey apartments
5 Karlin Lillington: How I managed to cut my mobile phone bill by at least half
Real news has value SUBSCRIBE