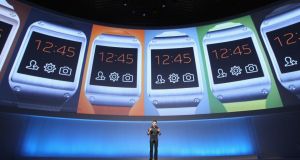 The tech world is going through a Dick Tracy phase, as Derek Scally describes it in today’s report from the IFA consumer electronics show in Berlin. While older tech fans mourn the fall from grace of the maker of the classic Nokia 6310, ever-excitable early adopters are salivating over the arrival of the latest smartwatches. These devices promise to overcome the enormous effort it takes to pull your smartphone out of your pocket.

The IFA show hosts the introduction of the Samsung smartwatch and the latest offering from Sony.

Next week sees the latest Apple product event. The Apple rumour mills are in overdrive at the expected launch of an ‘iWatch’.

Some will show your emails, text messages and social media, some will work as quasi-cameras, and some will even operate as proxy phones.

Much of the focus among developers is on health-related apps that can be tuned to work seamlessly with the new watches. There’s already a myriad of healthbands on the market from the likes of Nike and LG.

These monitor distance travelled, heart rate and the like with varied accuracy and tie this data in with health apps on your smartphone or tablet.

More powerful devices will mean greater data accuracy and much wider possibilities in that regard. It’s a long way from the calculator phones of the 1980s.

Aside from all this wrist action, there’s the continued testing of Google Glass, a device that seems permanently attached to the head of Google’s chief executive Sergey Brin these days.

The wider theme, it seems, involves wearable technology. Logically speaking it makes sense. How better to create a detailed profile of the user than to use something that’s often attached to their body from morning to night.

However, aside from the obvious user concerns about the data falling into the wrong hands, the increasing importance of form alongside function is likely to prove a challenge for the tech firms.

The tech arena is not one where fashion has had any notable success. Your average computer programmer is rarely confused with a fashionista. Yet in the world of wearable technology, success and failure will depend a lot more on styling, which is very subjective.

This may give the likes of Apple an edge; it has long placed aesthetics high on the agenda.

If tech firms can get the form and function right then it won’t be long before the fixation of the nation’s teenagers will move from phone to wrist.

Exchequer returns: what lies beneath
At first glance there is little to trouble the Government’s budget planning in the August Exchequer returns published on Tuesday. Tax returns may have slipped but deeper expenditure cuts mean the Government remains on track to comfortably meet its deficit target for the year of 7.4 per cent of GDP, thanks in part to
€3.6 billion gain from restructuring the IBRC promissory note and the sale of investments in Bank of Ireland.

However, it might be wise to take note of what lies beneath the slippage in tax receipts, particularly VAT and excise duties which are 3.5 per cent
(€245 million)and 4.1 per cent
(€127 million) behind target. Income tax was also behind target by 0.6 per cent which, along with the other undershoots, speaks to the fragility of the recovery and people’s reluctance to spend.

This in turn has a bearing on the fundamental question underpinning the budget, which remains unanswered. Should the deficit be cut by €3.1 billion as agreed with the troika or by the
€2.5 billion figure required to hit the target of 5.1 per cent of GDP?

The Coalition is divided on the
issue, with Fine Gael holding out for the larger figure and Labour the lower. Growing doubts about the intellectual and empirical arguments for austerity as a solution to the problem of excessive deficits mean there is a fair wind
behind the position of Eamon Gilmore’s party. It is also politically popular
among an electorate punch-drunk after five years of cuts.

The consensus is that the Government will split the difference and plump for a number somewhere between the two figures. If the slippage in tax receipts seen last month continues, the debate will intensify as both sides will see arguments in favour of a higher or lower number.

The deficit hawks will argue it shows that this is no time for complacency whilst the doves will hold that we need expansionary measure more now than ever.

McGann contemplates Promised Land
We’ve turned the page on our debt woes. That was the message from the three wise men of the paper and packaging giant Smurfit Kappa – chief executive Gary McGann, chief operating officer Tony Smurfit and finance chief Ian Curley – at a media briefing this week in Dublin’s Westbury hotel.

When the company floated in 2007, its timing couldn’t have been lousier, although McGann puts it down to bad luck. At the time, he recalls, “debt was abounding, it was just a cheap form of credit”. Then the credit crunch hit and, as we all know, the markets fell out of love with IOUs.

Smurfit Kappa, which had net debts of €3.4 billion, was punished hard by investors and has spent the years since chipping away at its debt pile. It has repaid €600 million in all. One got the sense this week, from McGann in particular, that management considered it drudgery to have to focus on repaying debt instead of growing its operations.

“Debt paydown is no longer central to growing the value of the company,” said a relieved-looking McGann. “Quite frankly, it has been a rollercoaster ride.”

He said Smurfit Kappa has not yet reached “the Promised Land, and when we do, I don’t even know if it will be as good as we’d like it to be”. The real question is not what the Promised Land looks like. Rather, it should be: where is it?

Late last year the company splashed out €260 million on Orange County, a Mexican-based producer with some operations in America. Since then, market observers have speculated about whether the company would re-enter the US market. The economy there is, after all, on the mend. Could the US be the Promised Land?

McGann would not be drawn. “The challenge for management is not to try and second guess what investors want. That’s a fool’s paradise – they often contradict themselves anyway,” he said.