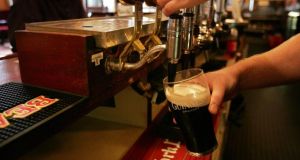 One thing that’s definitely a marketing ploy to get more people drinking, though Diageo may again say otherwise, is the Guinness Plus app launched for Android and iOS last month

Earlier this year a spokesman for Diageo defended Arthur’s Day saying it was, ahem, not a marketing ploy to get people to drink more but rather a music festival and celebration of the pub.

One thing that’s definitely a marketing ploy to get more people drinking, though Diageo may again say otherwise, is the Guinness Plus app launched for Android and iOS last month.

Users can check in to more than 6,500 pubs using the app. The more they check in, the more likely they are to be rewarded with prizes such as a party in the Guinness Storehouse. Also, users will get a free pint of Guinness at any participating pub just for downloading the app.

But wait . . . a Diageo spokesman said: “Guinness Plus is more than a mobile marketing tool to drive footfall into pubs and reward check-ins. The ‘wow’ feature of the app is its social map of the participating 6,500 pubs. Users of the app will be able to see how many other users of the app are in various pubs in their vicinity.”

Basically, a user could stand at the top of Grafton Street one evening and the app will tell them which pubs are busy with users of the app, and which pubs are quiet.

Apparently the app is the manifestation of more than two years of “strategic analysis reflecting the shift in relationships between consumers and their brands”. During this period, Diageo learned Guinness drinkers “crave connections that are more meaningful”.

So by developing an app that gives downloaders a free pint of Guinness and tells them what pubs are busy with other app users, they are getting more “meaningful connections”? Hmmm.

On the subject of Guinness, Diageo’s Peter O’Brien said the Government’s decision to increase excise on alcohol had “added substantial hardship to an industry that was already under considerable pressure”. Has he seen his own results? Pretax profit for the year to the end of June was £3.5 billion (€4.1 billion), up from last year’s £3.2 billion.