Broadband may be delayed further as new department takes over

Much-publicised initiative is being removed from the Department of Communications 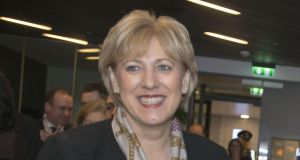 Heather Humphreys: responsibility for the broadband strategy has been placed under the remit of the Department of Regional Development, Rural Affairs, Arts and the Gaeltacht, of which she is Minister. Photograph: Dave Meehan/The Irish Times

The national broadband plan may face further delay as responsibility for its delivery is moved to a different Government department.

However, a Government spokeswoman said delivery of the broadband plan remained a “priority”.

Under the new administration, responsibility for the broadband strategy has been removed from the Department of Communications and placed under the remit of the newly configured Department of Regional Development, Rural Affairs, Arts and the Gaeltacht.

However, it is unclear if the team overseeing the project within the Department of Communications is moving to the new department or being split up.

In a statement to The Irish Times, a Government spokeswoman said: “The two departments will be working together to give effect to the relevant commitments in the programme for government, and the Taoiseach’s speech on Friday evening in which he nominated members of the Government.”

She noted that a new Cabinet committee on rural affairs would also oversee the plan.

The Department of Communications recently announced the plan would be delayed by six months, eliciting a chorus of disapproval from Opposition parties and rural groups.

The delay, blamed on the complexity of the tender, means the network will not be fully in place until at least 2022 instead of 2020 under the original timeline.

Five bidding consortiums submitted pre-qualification questionnaires ahead of the department’s March deadline for initial submissions and are expected to enter a competitive dialogue process with the department in June.

The Government expects to be in a position to award two subsidised contracts for the introduction of the scheme in the second quarter of2017.