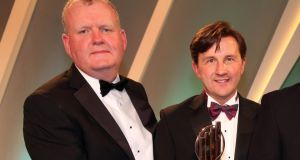 The founders of mobile marketing company Brandtone, Donald Fitzmaurice and Pádraig McBride, last night scooped top prize in the emerging category at the EY Entrepreneur of the Year awards.

The Dublin-headquartered firm runs mobile marketing campaigns for big brands including PepsiCo and Heineken, asking consumers to give personal data, such as information on shopping habits, in return for rewards.

Founded in 2010, the company tapped into a surge in demand for mobile-first, data-led marketing strategies.

It now operates in 12 international markets, employs 120 staff and claims to have worked with over 60 global brands.

It uses the concept of “sustainable engagement” to help companies build one-to-one relationships with consumers.

It recently signed a multi- million euro deal with Unilever to help the multinational engage with consumers in southeast Asia.

Accepting their award, Mr Fitzmaurice said the company was born from one central and key observation - 50 per cent of the world’s population is in 12 key developing markets.

“Virtually all the world’s economic growth is coming from these markets. Consumer spending in these markets is going to increase from $14 trillion to $25 trillion in the next five years - and the only infrastructure capable of delivering services to these markets is mobile,” he said.

Mr Fitzmaurice - previously an executive chairman of Intivation, the maker of solar-powered mobile handsets – paid tribute to the overall winners Stripe saying it was like losing out to the All-Blacks in the semi final of the Rugby World Cup.

Pádraig McBride, previously the chief financial officer of Digicel, said he was in “complete shock”, noting there was a lot of talented companies in the competition.

“There was a lot of companies that I personally would have put ahead of us but to get that nod of recognition from the judges is phenomenal.”

Chairwoman of the judging panel Anne Heraty said: “Building sustainable one-to-one relationships between global brands and consumers, both Pádraig McBride and Donald Fitzmaurice have proved to be resilient and innovative strategists.

“Brandtone has already doubled its client base in 2015, capturing big brands. They communicate with over 68 million consumers through their mobile platform.

“With ambition to be present in 22 markets, catching 70 per cent of all consumers globally by 2017, Brandtone are deservingly the Emerging EY Entrepreneur of the Year winners,” she added.

The other finalists in the emerging category were Darragh Richardson of Agile Networks; Catherine O’Neill of Amelio Group; Dave O’Flanagan of Boxever; Alan Coleman of Brite:Bill; Ben Harris of Drop; Morgan Browne of IIS Group; and Brian Thornes of X-Bolt Orthopaedics.