The Cabinet will assess later this year whether to build the Health Innovation Hub, with the potential to create thousands of jobs 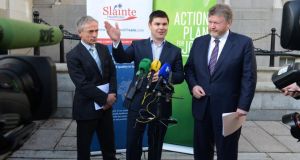 The History of the IFSC, a book by Irish Times journalist Fiona Reddan, recounts how Charles Haughey gatecrashed a meeting of officials and finance industry leaders in the 1980s. He told them they were not there to decide if unemployment-ravaged Ireland should build an international financial services centre. That was a given, he said, and they were only to decide how it was to be done.

One of the current Government’s big ideas for significant job creation is to build an IFSC-type testbed centre for medical technology companies, the Health Innovation Hub (HIH). It was listed in Enterprise Minister Richard Bruton’s first Action Plan for Jobs as one of the seven “disruptive” measures that could help drag thousands of people off the dole.

The HIH is a grand collaboration between Bruton, his health counterpart James Reilly, Enterprise Ireland, the Health Service Executive, IDA Ireland, Science Foundation Ireland, and an assortment of industry, hospital and academic figures.

So far, so IFSC, except the initiative is being piloted in Cork with a view to establishing a national centre later, or possibly a handful of regional hubs.

The aim is to give medtech companies ready-made access to the Irish health system via the hub to rapidly live-test their products. The big idea is that indigenous companies will use it to develop new products for export, while foreign companies will be attracted to invest near the HIH for the same reason.

The hub’s leaders will this month select the final dozen or so companies that will take part in the last part of its pilot phase, before Bruton and Reilly go back to Cabinet to seek approval and funding to build it.

Six companies, including Sláinte Healthcare and Abtran, took part in the first call of the pilot phase, which ended last year. More than 40 companies applied for the second call for HIH projects.

This proves, its leaders insist, that it is “gaining traction”.

“We want Ireland to become the Silicon Valley for medical technology companies. We want them all to come to this country to research and test their products using the Irish health system,” said Bruton.

“ We have all these industries here – medical devices, technology, pharmaceuticals etc. The idea was to join them all up in the HIH. I don’t want to oversell something that is still being piloted. But when we mention this to industry leaders abroad, they prick up their ears.”

Reilly pointed to the spin-off for the health service: it gets early access to brand new solutions to solve problems such as infection control and electronic prescriptions. “By bringing the healthcare system into close proximity with innovators in industry, we enhance the possibility of developing technologies that will benefit patients,” said the Health Minister.

Two of the most senior figures involved in the hub are Dave Shanahan, the former head of Pfizer in Ireland and a former senior executive at IDA Ireland, and Prof John Higgins, the UCC academic whose “Higgins report” is being used to reshape the hospital service.

Innovative ideas
Shanahan, the early driving force behind the idea, chairs the HIH national implementation body, while Higgins oversees the regional steering group at the demonstrator hub in Cork. Both think it is a game-changer for the medtech industry in Ireland.

“We’re late to the party,” said Shanahan. “We’ve been at it for four years, and it has taken the health system a long time to see the benefits. We have been asked to go and prove the concept, but I think we should just go and do it. We need to show some ambition.”

Shanahan suggests that the HIH could be funded using a public-private partnership on an ongoing basis, and that a national hub would initially need just €1 million a year to operate.

Higgins says he “cannot say for certain” how many jobs the HIH will create. Twenty years on, the IFSC directly employs 32,000. “But we think we are on to something,” he said.

Dr Colman Casey, a colleague of Higgins, is a director of the demonstrator hub in Cork. Its proponents say he is one of the “nuts and bolts” figures in the drive to prove the HIH concept.

Casey believes innovative ideas get “locked in” to the health system, but hospital leaders on the ground now see the benefits for the system of allowing medtech companies access to test solutions.

“We’ve basically created a bridge to the HSE,” he said.

The first call for projects was held in 2012, encompassing a range of indigenous medtech SMEs. Abtran tested a telecommunications system for managing the referral of patients from Mitchelstown primary care centre to Cork University Hospital. Casey said the project is ongoing.

Medtech solutions for infection control is one of the big health issues that is being tackled in the HIH pilot phase. Aran Healthcare, backed by AIB’s seed fund and Enterprise Ireland, used the HIH to test a product for sterilising hospital mattresses. Casey said this has now gone to a live trial at a hospital.

Cork firm Radisens Diagnostics, whose clients include the European Space Agency, prototyped a machine for GP practices that gives instant results for tests for issues including diabetes and cholesterol levels.

According to Casey, Radisens is now building partnerships with US and British companies on the back of its HIH involvement.

Sláinte’s chief executive Andrew Murphy said the company is already selling Vitro abroad, but prospective clients were always asking why it had not validated its product in its home market.

“It’s cheaper to validate your assumptions closer to home. At least now, start-ups in the medtech sector will have somewhere to go to prove their products,” he said.

The real test for the HIH, said Murphy, would be if companies from the first call went back for the second call.

So, did Sláinte? “We have put in two applications.”

The final company involved in the first round of the HIH was Rigney Dolphin, the outsourcing firm run by former HSE chairman Frank Dolphin. It tested a telephony workflow system for post-discharge check-up calls for a Cork epilepsy clinic. Casey said the project would have benefitted from using a clinic with a higher number of patients.

Dolphin said his company did not apply for the second round, and that “parts” of the health system are open for innovation.

“What is de-facto practice in the US is considered innovation here. But the HIH has to succeed. The health service has to pay for itself by facilitating job creation. Ireland has the potential to become a destination for more foreign investment in the medtech industry. We were missing a trick.”

The dozen or so companies for the final pilot before the hub is developed will be selected and announced in March. Shanahan, who in future could end being viewed vis-a-vis the HIH in the way Dermot Desmond is often viewed through the prism of the IFSC, wants the Government to push ahead with it. “This won’t be a big bang, it will take more time. But the jobs potential is huge. When you’re small like Ireland you have to be scrappy. Let’s get on with it.”


Health Innovation Hub: Stewarding the process towards development
The establishment of the HIH is being stewarded by two large working groups of officials and academics, one at national level and one at local level.

The national implementation team is the body tasked with overseeing the project. It is chaired by Dave Shanahan, the former head of life sciences at IDA Ireland. He was also previously Ireland country head of Pfizer, and was an investor in Chartered Medical alongside the developer Paddy Kelly.

It also includes Prof John Higgins, the professor of obstetrics and gynaecology at UCC and a consultant at Cork University maternity hospital.

Higgins was also the person asked by Minister for Health James Reilly to draw up the blueprint for a national reorganisation of the hospitals sector.

The Department of Health is represented by its assistant secretary general, Bairbre nic Aonghusa and Audrey Hagerty, another senior official. The Health Service Executive is represented by Liam Woods, director of shared services.

The rest of the national group comprises representatives of the various state enterprise agencies.

IDA Ireland is represented by Barry O’Dowd, its senior vice president. Enterprise Ireland, which backs many of the firms that have applied to the HIH, is represented by Keith O’Neill, its director of life sciences, and Sean Mulvany, a commercialisation specialist.

At a local level, the project’s director is Dr Colman Casey. A local steering group of Cork-based academics, consultants, pharma executives and hospital managers oversee the management of the scheme on the ground.

1 Why are markets booming when a crash is on the way?
2 Nine more suing INM and Leslie Buckley over alleged data hacking
3 Columbia Sportswear defies gloom with first Irish standalone shop
4 Could your old car be giving away all your secrets to its new owner?
5 How to further divide the economy using the wage subsidy
Real news has value SUBSCRIBE