Become a barista in your own home 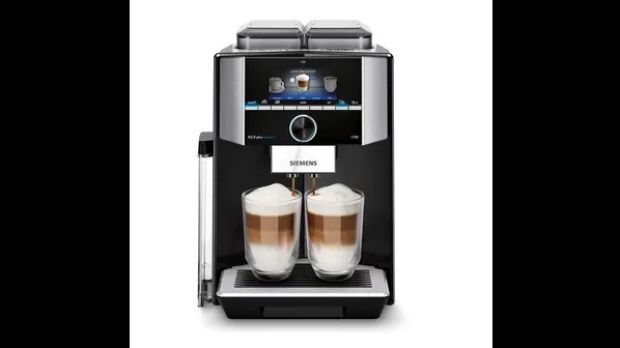 Siemens EQ9 S700 Plus Connect: If you like your coffee, this machine is right up your street. It’s easy to use, with both a regular and barista mode.

There was a time when I didn’t drink coffee. That was before a full-time job and two small children, when I would think nothing of getting home at 4am and heading back out the door a couple of hours later to get started for the day.

These days, it’s more of a necessity to get me through the day. Early shifts in work, teamed with the realisation that young children don’t differentiate between weekdays and weekends when it comes to getting up in the morning, mean I get a lot less sleep than I used to. And I’m less able to cope with it because there is no opportunity to catch up.

Forget about clean eating and concerns about putting stimulants into your system; the bigger the caffeine kick the better, as far as I’m concerned.

Which is how we get to my relatively new-found appreciation of coffee. I now speak a language twentysomething-year-old me wouldn’t recognise. I know what a bean hopper is, and why it is important to watch the brewing time on your coffee. I can also tell you why getting the size of the grind right is so important – things I neither knew nor cared about a few years ago. Should this tech gig fall through at some point in the future, with this newfound interest in coffee maybe I could retrain as a barista.

Most of this limited knowledge was picked up in the couple of weeks since the Siemens EQ9 S700 arrived on my doorstep. This not your average coffee machine though. It’s a lot bigger for a start, taking up a considerable amount of space on the kitchen counter. It still looks good though, so while it may be large it’s impressive.

It’s bean to cup, so there is no grinding of your own beans or ground coffee to spill around the place, although you can use the latter if you wish. It has a double bean hopper too, each with its own grinder, so you can have two different types of coffee beans at your fingertips.

And there is an astonishing choice of drinks you can make, preprogrammed into the machine, from ristrettos and espresso to cortados and capuccinos. You can also heat some milk or just go for plain hot water.

The machine itself, once you have it set up, is relatively easy to use. Beans go in one end, coffee comes out the other and the machine prompts you along the way to do the mundane things like fill the water tank or rinse the milk system. You choose your drink on the display, scrolling through the options with a handy wheel.

Getting it set up wasn’t a quick process though, so you’ll need to set aside some time to do it, hunting down the bits of tape that hold everything together for transport was a particularly fun activity.

Once you have run through the set-up and the initial rinse, you can get grinding. There are two modes for this machine – default, which gives you all the drink options, plus the ability to choose how strong you want your coffee, what size you want, or how much milk you want for the milk-based drinks; and barista, which adds temperature control for the water and the brewing speed of the coffee.

You can save your favourites to your own user profile on the machine, and if you choose to sign up to the Home Connect app, you have control of the machine remotely. Don’t get overly excited by this though; if you dream of coming down in the morning to a fresh cup of coffee, be aware the coffee maker rinses when it switches on, so you’ll have some dirty water added to your drink.

The app can, however, tell you everything you need to know about your use of the machine, plus add some extra drink options through the CoffeeWorld section so you can try something new.

It wasn’t all smooth-sailing. There were some mishaps, like the time I unwittingly turned on the cup warmer in the settings (a handy feature nonetheless) and subsequently leaned over the top of the machine to reach something. Let’s just say it was unexpectedly toasty.

And there was the coffee explosion, before I realised the brewing unit should be cleaned out once a day – quick rinse, it’s nothing too onerous, or you’ll end up with coffee seriously gumming up the works. That took some cleaning up.

But the coffee itself tasted great, and even converted a few non-drinkers to the cause. That has to be the most ringing endorsement of the Siemens machine.

If you like your coffee and are willing to pay for it, this machine is right up your street. It’s easy to use, with a regular mode and a barista mode; go for barista if you like to fine tune your coffee. The coffee tastes great, which is all anyone really cared about at the end of the day.

You can make two cups at the same time, if you have multiple drinks to make.

It also connects to the Home Connect app, which is also used by Bosch and Neff, and opens up new coffee choices, like the Dead Eye (an American creation, according to the app, that puts three shots of espresso into a coffee). It’s easy to set up, with the app walking you through the process.

It’s quite a large machine and takes up a bit of space, so may not be suitable for every home. It’s not cheap either, although the initial “how much?!” gave way to some serious justification over the following couple of weeks.

The Home Connect app is handy for adding CoffeeWorld drinks, but other than that, it’s not essential.

Expensive, but for serious coffee lovers it is worth the investment.

1 Court ruling could help up to 20,000 people in Celtic Tiger-era debt