Athenry facility, to be operational in 2017, will help run its online services like iTunes and maps 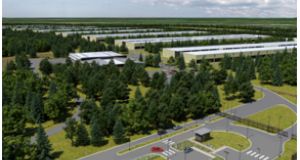 Apple is to invest €850 million developing a new data centre in Co Galway to help run its online services like iTunes and Maps.

The facility, to be built on a greenfield site near Athenry, will be entirely powered by renewable energy and create 100 new jobs.

It was announced as part of a €1.7 billion global investment by the California-based tech giant, with a similar centre announced for Denmark.

The centres, which will be operational in 2017, represent Apple’s biggest-ever investment in Europe.

The company, which already employs over 3,000 people here, said they will power Apple’s online services, including the iTunes Store, App Store, iMessage, Maps and Siri for customers across Europe.

Apple joins rivals Google and Facebook in building data centres in northern Europe, where the temperate climate helps save on equipment cooling costs.

The project lets Apple address European requests for data to be stored closer to local users and authorities, while also allowing it to benefit from a chilly climate that helps save on equipment-cooling costs.

“We’re thrilled to be expanding our operations, creating hundreds of local jobs and introducing some of our most advanced green building designs yet,” he added.

Apple’s tax arrangements in Ireland remain the focus of a state aid inquiry being conducted by the European Commission, with a ruling expected some time before the summer.

The company’s latest investment here, which is backed by the IDA, represents a significant vote of confidence in the Irish economy .

Taoiseach Enda Kenny described it as a “very significant investment in the West of Ireland”.

“As the Government works to secure recovery and see it spread to every part of the country, today’s announcement is another extremely positive step in the right direction,” he said.

The Europe investment marks a push by Apple in Europe where sales rose 66 per cent last quarter, outpacing growth in the Americas.

IDA Ireland and Coillte worked for several months to come up with a suitable site to secure Apple’s investment.

The Galway site will be will be located on land owned by Coillte at Derrydonnell while in Denmark, it will be in Viborg, western Denmark.

IDA chief executive Martin Shanahan said: “This is an important strategic investment by Apple in a regional location, with significant local economic benefits.

Minister for Jobs Richard Bruton said: “Today’s announcement that Apple is making part of the company’s largest ever European investment in rural County Galway, with the creation of a total of 300 jobs, is a huge boost for the west and a great example of what is possible with the right policies.”

Apple said its Galway project would recover land previously used for growing and harvesting non-native trees, and restore native trees to Derrydonnell forest. It will also provide an outdoor education space for local schools, as well as a walking trail for the community, the company said.

American Chamber chief executive Mark Redmond said the investment is a “tremendous vote of confidence in Ireland” as a location for investment, and further establishes the country’s reputation as the data capital for Europe.

“It is particularly welcome that this is a truly green investment as Apple will run this new facility entirely with renewable energy,” he added.

Google opened a data centre in Finland in 2011 and in September unveiled plans for one in the Netherlands. Facebook started one in Sweden in 2013.

1 ValueAct sells entire stake in Rolls-Royce
2 ‘Saudi Arabia is where the opportunities will happen in future’
3 Scars from the crash give Irish banks 2.6 billion reasons for Covid caution
4 What will the office market look like after the great remote working experiment?
5 Greencoat Renewables raises €125m in share placing
Real news has value SUBSCRIBE