Apple’s €318m tax deal may affect other multinationals in EU 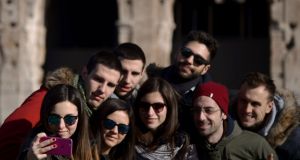 A group takes a selfie with an iPhone in front of the Colosseum in Rome: Apple has agreed to pay €318m to settle an Italian tax claim. Photograph: Filippo Monteforte/AFP/Getty Images

An agreement by Apple to pay €318 million to settle an Italian tax claim in relation to profits declared in Ireland could have EU-wide implications, according to commentators in Italy.

The agreement, as revealed in Italian media yesterday, relates to an investigation into Apple opened by the Milan public prosecutor’s office in November 2013 following a raid by the Italian finance police on Apple’s Milan headquarters.

In March this year, that investigation concluded that between 2008 and 2013, Apple Italia had “transferred” €879 million of profit to Cork-based Apple Sales International in order to avail of Ireland’s lower corporation tax rate. At that stage, the Irish corporation tax rate was 12.5 per cent, while it was 43-44 per cent in Italy. Apple has itself said, however, that it paid an effective tax rate of less than 2 per cent in Ireland over the 10 years to 2013.

Senior Apple managers in Italy as well as Apple Sales International director in Cork Michael O’Sullivan were all formally notified by the Milan judicial authorities as part of the investigation. Apple Italia is part of the the Californian group’s European operation which has its headquarters in Ireland.

Legal experts have pointed out that the relatively low tax payment is based on the fact that investigators have charged Apple not with “fiscal fraud” but rather with an “incomplete [tax] declaration”.

Italian investigators believe this case is a defeat not only for Apple but also for other multinationals which have benefited from favourable trans-territorial tax arrangements.

This scrutiny matches the mood in Brussels, where the European Commission recently extended its investigation into the alleged “sweetheart” tax deal between Apple and the State. The Government had expected the case to end soon, but renewed questioning before Christmas suggests the inquiry could extend until after the forthcoming election.

The investigation began in 2014, with the verdict originally expected early in 2016. Negative decisions have already been delivered in relation to the arrangements of Starbucks and Fiat Chrysler with Dutch and Luxembourg authorities.

Rome daily La Repubblica suggested the “fine” would be welcomed by organisations such as the International Monetary Fund, G20 and OECD which have long discussed the issue of internationally “creative” accounting by multinationals.

1 Bank leaked my loan request to family who tried to rip me off
2 Coronavirus: Irish holding back on holiday plans
3 Digicel’s earnings rise as it looks towards refinancing $1.3bn of bonds
4 Packing company wrapped up in online, design and sustainability
5 Can I see my father’s previous wills?
Real news has value SUBSCRIBE