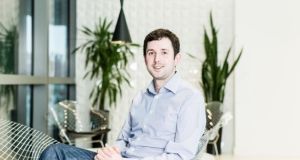 Peter Cahill, co-founder of Voysis, which has been bought by Apple

Voysis, an Irish company that has developed technology that helps digital voice assistants understand natural language better, has been acquired by Apple.

No financial details of the deal, which was first reported by Bloomberg News late on Friday, have been disclosed. Analysts said Voysis’s technology would likely be used by the technology giant to help improve the company’s virtual assistant Siri.

“(Apple) buys smaller technology companies from time to time, and we generally do not discuss our purpose or plans.” the Cupertino-headquartered company said in a brief statement.

Voysis was founded in 2012 by Peter Cahill who had previously spent 15 years researching speech technology and neural network research. The company has developed a voice recognition platform driven by natural language instructions and search capabilities that is extremely good at recognising and responding to voice commands from users.

It represents another big pay day for Irish tech veteran Noel Ruane’s Polaris Partners, which led an $8 million Series A funding round for Voysis in 2017, and which also previously backed Pointy.

Mr Ruane, a former executive at IDA Ireland, is a co-founder of Voysis and serves at its executive chairman. He was instrumental in setting up Dogpatch Labs in Dublin while Polaris has backed a number of Irish tech companies including Boxever Logentries and Profitero.

Voysis’s artificial intelligence (AI)-based technology was used primarily by companies who wanted to create their own voice-led apps and assistants independently of those provided by tech giants like Apple, Amazon and Google.

The company, which also has offices in Boston and Edinburgh scored a major coup in 2018 when it persuaded one of Google’s most celebrated engineers to join the company. Ian Hodson, former head of voice at the tech giant, was in charge of its text to speech programme and provided pivotal input on Google Maps, Google Assistant and Android voice, before joining Voysis.

The last publicly available accounts for Voysis, which cover 2018, show it had accumulated losses of €6.7 million.

The acquisition is the second deal from Apple this week after it also acquired weather app Dark Sky, also for an undisclosed sum.

1 How to gift your child a house deposit . . . tax free
2 BOI customers to be charged twice with bank fees on New Year’s Eve
3 Decades of work and a bit of luck drove Oxford vaccine success
4 Ryanair warns it may reduce more services and relocate operations
5 Irish designer of Oxford vaccine: ‘I’ve never worked so hard in my life’
Real news has value SUBSCRIBE