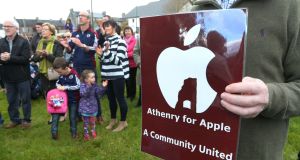 People from Athenry have demonstrated in support of Apple’s plans to invest in the town on several occasions in the past couple of years. Photograph: Joe O’Shaughnessy.

Apple, the company at the heart of the legal challenge, was silent following the outcome of the ruling on Thursday by Mr Justice Paul McDermott. The US tech giant has warned previously that the Athenry project could be shelved if it were subject to further delays.

While welcoming the decision that paves the way for construction of Apple’s €850 million data centre in Athenry, business representative bodies and politicians have criticised the delays in the planning process and are calling for reform.

Chambers Ireland said “spurious attempts to undermine the State’s planning processes and bodies should no longer be tolerated”.

The chamber pointed out that an Apple data centre in Denmark is nearing completion, having been announced at the same time as the Athenry project. “There is no point introducing a national planning framework or a capital investment plan if every significant investment decision is to be delayed in this manner,” said chamber chief executive Ian Talbot.

“Cases such as this cause reputational damage on an international scale and directly threaten the likelihood of foreign direct investment companies choosing Ireland as a destination.”

The issue of reputational damage was picked up by Minister of State Seán Kyne, a TD for the Galway-West constituency. Mr Kyne said that while the court ruling was “great news for Athenry and the country”, the delays have caused “some loss of reputation internationally”.

“If this decision had gone the wrong way, it could have sent a very poor signal to other companies,” he told The Irish Times.

“We have obviously a very good package to offer. If there’s a view out there that trying to invest in Ireland is going to be difficult, then clearly that would cause long-term damage, particularly in light of Brexit.”

“In light of the time that it took to arrive at this decision, we will have to take a critical look at this whole process,” he said. “The way it stands it is far too slow and is a threat to employment and the economy in general.”

Other critics of the planning system included Ibec, who called it a “black hole of bureaucracy”.

Órla Casey, an executive at the business lobby group, warned that delays such as those in the Apple Athenry case meant we could see these projects go elsewhere.

“Unfortunately, high-profile cases like this might amplify the perception that Ireland is a difficult place to do business. There are plenty of examples of both public and private projects being derailed due to inbuilt flaws in the planning system,” she said.

Mr Kyne suggested that a new planning regime could be introduced to deal with a project of this scale.

“For infrastructure and road projects, you have fast-track planning and perhaps for projects of this scale, that could be looked at,” he said.

Ireland’s foreign direct investment agency, IDA Ireland, noted the Commercial Court ruling and said it would “continue to work with the company as they advance their plans”.

“This is a project with a pan-European dimension and we’re so proud that Galway has been chosen as home to Apple’s largest data centre project in Europe,” Galway Chamber of Commerce said in a statement.

“This development ties in with a good regional enterprise strategy, which is something that we have been vocal on,” said chamber president Maurice O’Gorman.