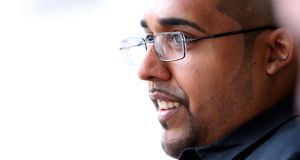 Hector Xavier Monsegur, a computer hacker known as ‘Sabu’, a former member of Lulzsec and Anonymous, leaves Federal Court in New York after having been granted a sentence of time served for a string of serious hacking charges. Photograph: EPA/Andrew Gombert

A leading hacker who authorities say helped disrupt at least 300 cyber attacks after agreeing to co-operate with the FBI was sentenced to time served today.

Authorities say Hector Xavier Monsegur, a onetime member of the cyber-activist hacking group Anonymous who under the name “Sabu” co-founded the offshoot LulzSec, had assisted in pursuing cases against eight other suspected hackers since 2011.

Mr Monsegur’s cooperation shocked the hacking community, but during his sentencing in a large ceremonial courtroom in New York filled with journalists and observers, US district judge Loretta Preska repeatedly saluted his help as extraordinary.

“That personal characteristic of turning on a dime and doing good and not evil is the most important factor in this sentence,” said Judge Preska.

Mr Monsegur had served about seven months in prison and the judge also sentenced him to a year of probation.

Mr Monsegur, wearing a black shirt, khaki pants and wire-rim glasses, nodded affirmatively while the judge described his assistance to the government.

“I assure you, I’m not the same person you saw three years ago,” Mr Monsegur told the judge. “I’m ready to move on.”

According to a court filing by US prosecutors, Mr Monsegur (30) and five other members of Anonymous formed LulzSec, which engaged in hacks on companies including Internet security firm HB Gary, News Corp’s Fox Television, Tribune Co and Sony, as well as the website for the US Senate.

After the FBI approached him at his home in June 2011, Mr Monsegur agreed to co-operate with law enforcement.

He secretly pleaded guilty to charges including computer hacking in August 2011, a fact that did not become public until charges were announced against five other hackers connected with LulzSec in 2012. Among those charged was Jeremy Hammond, a Chicago resident who at the time was the FBI’s No.1 cyber criminal target.

Hammond (29) was sentenced in November to 10 years in prison after pleading guilty to cyber attacks on various government agencies and businesses.

US prosecutors said in the court filing that Mr Monsegur’s co-operation also led to the prosecution of Matthew Keys, a former deputy social media editor of Reuters.com. Keys has pleaded not guilty to charges that he aided members of Anonymous.

Mr Monsegur also engaged in a “significant undercover operation” that exposed an unnamed subject’s role in an existing investigation soliciting cyber attacks on a foreign government, prosecutors said. No charges have resulted in the case.

The roughly 300 computer hacks Mr Monsegur helped prevent included targets such as the US Armed Forces, the US Congress, the federal courts, and NASA, prosecutors said.

He also provided information about vulnerabilities in critical infrastructure such as a city’s water utility and a foreign energy company.

While US authorities praised Mr Monsegur’s co-operation, they also said in the court filing that contrary to rumor, Mr Monsegur was not involved in the prosecution of operators of Silk Road, an Internet black-market bazaar that accepted Bitcoin. – Reuters

1 If international visitors are pariahs should we not be testing them on arrival?
2 ‘My rent here is so low it’s a joke’
3 Belgium helps Ireland to a Brexit boon
4 Varadkar to meet banks in row over interest on mortgage payment breaks
5 Can Grafton Street stop the flood of closures?
Real news has value SUBSCRIBE