All aboard the Startup Express 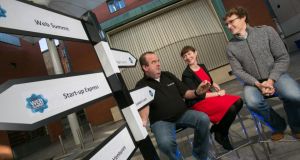 A specially chartered train will today bring more than 180 entrepreneurs and venture capitalists from Cork to the RDS for the Dublin Web Summit.

The train, dubbed the Startup Express, will leave Cork’s Kent Station at 4pm and head for the RDS, travelling along Dart lines once it reaches Dublin. It will arrive at Sandymount Dart station near the RDS at 7.40pm.

On board, passengers will have the opportunity to take part in a variety of networking activities on three specially designed carriages.

Ten Cork-based startups will be given space on the startup carriage where they’ll receive mentoring from top accelerator TechStars, as well as some of Ireland’s most experienced entrepreneurs.

“The Startup Express was an idea that came to us and we never thought we’d have as much demand as it’s received,” Trustev chief executive Pat Phelan said.

He said the majority of passengers aboard the train will be from Cork but there are also people flying in from eleven countries to make the journey up to Dublin on the Startup Express.

The wealth of quality startups in Ireland is a sign of a creative and entrepreneurial society, Microsoft Ireland’s Claire Dillon said.

“Among the young people from across the country attending the Web Summit with innovative ideas and ambitious dreams are the leaders and employers of Ireland’s future. The Startup Express is all about giving them support on their journey,” she added.

Cork tech companies VoxPro, PCH International and Trustev are covering the cost of the chartered train.

1 Coronavirus: Property rental in the jaws of the epidemic
2 WhatsApp limits message forwarding to slow spread of misinformation
3 I want to change my will quickly in case I fall ill. Do I need a lawyer?
4 NTMA raises €6bn from bond auction to help State meet costs of Covid-19
5 Kerry fintech Taxamo agrees partnership with Deloitte
Real news has value SUBSCRIBE