A slap on the wrist for the Apple Watch 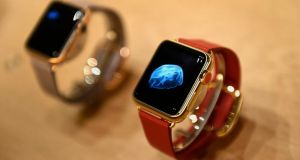 The Apple Watch Edition. Apple Watch is the company’s most environmentally friendly product. But there are still some concerns over the conditions of the factories where Apple’s products are made, and the lack of benefit to the American economy.

It’s difficult to know what the defining news moment of 2015 has been so far: the consecration of the first female bishop in the UK? The explosive Westminster cash-for-access scandal? Patricia Arquette’s inspiring call for equality in her Oscars speech?

Or yesterday’s announcement of the Apple Watch from company chief executive Tim Cook. #ICYMI (in case you missed it), the most valuable company in the world announced the specs and models of its timepiece – and a new MacBook – at a ceremony that included a lot of whoops and clapping from middle-aged white men, and a video of supermodel Christy Turlington Burns training for a half marathon in Africa.

So is the Apple Watch worth a purchase in any of its guises? Here’s why I’m not too impressed, and why you shouldn’t be either.

1. ‘If you’re an email junkie, you can read full emails’

Said Cook, excitedly, as though the idea of us being able to access phishing scams, PR requests, political party propaganda and long-ago subscribed-to newsletters 24/7 was a good thing.

One of the rudest things a person can do is check their phone over dinner. Soon to be usurped by checking one’s Apple Watch over dinner.

There is no doubt that the Health angle of the Apple Watch is very impressive. The company has worked with the likes of the University of Oxford to create health monitoring apps, including for breast cancer, cardiovascular disease and Parkinson’s disease.

This means that as the Tories privatise the NHS and Obamacare faces an uncertain future and we all crumble into dust, those of us able to afford the Apple Watch and newer model iPhones will be kicking back with a resting heart rate of 50, while spamming social media with our 10k run PBs. Sorry about the rest of you.

We envision a future in which Apple Pay becomes the new American Express Black. All of us currently feel a little James Bond about our contactless debit cards (right?), but imagine a world in which Apple Pay allows for limitless transactions; a sea of Christian Greys flashing their wrists at waiters and pointing it at bell-boys.

I’m just gonna throw this out there: anybody who is considering purchasing a $17,000 solid gold watch – don’t. First of all, spending what could be the deposit on a flat, or a whole car, on a timepiece is ridiculous. But if you must, at least go for a brand with a little class and heritage.

Or, I dunno, just go to Frieze and buy an original artwork. Culture, innit.

5. The Internet of Things is turning us into robots

Pretty soon, every single thing in our lives will be connected – this concept is known as the Internet of Things, which is annoying in itself.

But with the forward march of Apple Watch and other products – and their integration with literally everything – we’ll soon be living in a world in which going back to someone’s flat at the end of an evening will result in them discussing how they control their underfloor heating with just the swipe of a watch face. Great.

6. There is a Mickey Mouse edition watch face

I used to have a Lion King watch when I was at school. I was seven. Any adult who orders a Mickey Mouse Apple Watch is a tool. Worse, anybody who buys a $350 (£230) watch for their child, is also a tool.

Kids are muddy and messy and roll around and spill things and break things and lose things. No point to this Mickey Mouse watch face, then.

Now the type of people who can’t sit through a movie without providing a running commentary, or listen to a song without either Googling it or Shazam-ing it can run wild without even reaching for their pocket.

Shazam is a service that allows users to instantly call up the title and details of a song by recording a snippet of it on a phone.

With a special app for the Apple Watch, the use of Shazam will become a lot of more frequent. Imagine a sporadically romantic event ruined as your new beau calls up his watch to identify Mazzy Star’s Fade Into You playing in the restaurant. Classy.

Apple Watch is the company’s most environmentally friendly product. But there are still some concerns over the conditions of the factories where Apple’s products are made, and the lack of benefit to the American economy.

Do you really wanna be another cog in the great evil capitalist machine? Are we all just abandoning our morals for shiny things? (Yes.)

9. All the other things you could be buying

Just, for example, things that would make you look much cooler than having the cheapest model Apple Watch: a sharp Aquascutum suit, this cute J Crew dress, a first edition Bill Clinton, Wimbledon tickets … I mean, pretty much anything.

The plus point, however, to owning a new Apple Watch? It’s very good at telling the time. Yup.

1 Coronavirus: New government could face €11bn of austerity
2 HSBC board rethinks overhaul and seeks even deeper cuts
3 Working from home: New costs, new stresses and little relief
4 Joint accounts: if one of us dies, can the other access the money?
5 Investor alleges fraud over collapse in property fund value
Real news has value SUBSCRIBE