A potted history of western culture by infographic 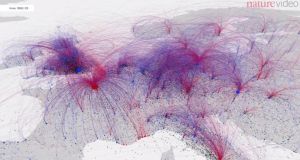 This wonderful animated infographic from Nature Video is based on a new scholarly paper offering a macroscopic perspective of cultural history. The video shows the paths of 100,000 notable historical figures on their journey from place of birth to death. It shows all paths leading to Rome until its fall, after which cultural centres expand across Europe, and artists come to Paris to live – and die – there. The expansion to the West Indies is followed by the Americas, and many flock from the east to the west coast as the railways are built. It’s a fascinating potted history of western culture as told by the movements of notable figures from Leonardo da Vinci to Marilyn Monroe.