Whatever his knighted nemesis Tony O’Reilly can do, O’Brien proves he can do better 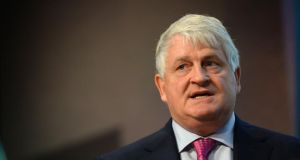 Denis O’Brien: has been awarded honorary membership of the Order of Jamaica, for services to its telecommunications industry. Photograph: Dara Mac Dónaill

Denis O’Brien may be getting crucified in the land of his birth over what some see as the bone-headed extent of his self-pitying litigiousness, but they venerate him in Jamaica, the main stable of his Digicel cash cow.

O’Brien has just been awarded honorary membership of the Order of Jamaica, the island state’s equivalent of a knighthood, for services to its telecommunications industry. The floatation candidate Digicel started on the island 14 years ago and has since turned the regional market upside down.

Past recipients of the order include the Digicel-sponsored Usain Bolt, who was conferred in 2007, Queen Sofia of Spain and Toots Hibbert, the lead singer of reggae and ska band Toots & the Maytals.

O’Brien’s best bet for a future upgrade is probably honorary membership of the Order of Merit. Recipients can use the letters OM after their names, although for a south Dubliner, a G! could be added to that.