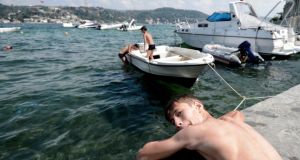 Syrian refugees enjoy a sunny day in Istanbul. More than 40 per cent of Syria’s pre-war population has been displaced by the conflict, with 2.8 million taking refuge in other countries in the region. PHOTOGRAPH: EPA/ERDEM SAHIN

Despite the war, upheaval and economic collapse at home, Syrian business interests now top the list of international investors in Turkey, even as tensions over work opportunities between Turks and their Syrians guests spread. Against mounting odds, this year Syrians have opened 585 companies in Turkey, more than three times that of any other nationality.

Though it’s rightly been the stories of a brutal regime crackdown and ensuing conflict that have dominated headlines, Syria’s capitalists, too, have suffered. In 2010, just months before the uprising began, business in Damascus and Aleppo, Syria’s largest two cities, boomed, where a new generation of wealthy automobile dealers, developers and hoteliers had emerged.

But as the revolt turned to outright war three years later, and with the Syrian lira losing value against other currencies each day, the country’s business class fled to Istanbul and other cities across the region. Here in Turkey, they are now established in the production of chemicals, textiles, detergents and in other sectors.

Their most visible mark today are the numerous restaurants in central Istanbul and in regional cities across Turkey’s southeast, which offer a slice of home and a chance to recount past lives for the Syrians forced abroad.

The eateries also serve as important sources of employment and networking, particularly for young Syrian men, the customary breadwinner for thousands of families here today.

Fifty-three-year-old Samir from Aleppo, Syria, who now lives in Mersin in south Turkey, has traded seeds, fertiliser and medicine between Syria and Turkey since before the revolt broke out in 2011, but says now business has fallen away.

“There’s not a lot of work here now. I used to also have products transported from Jordan [to Turkey] by truck, but that’s impossible today,” he says. The fact that Syrians have been unable to secure visas in Gulf countries makes Turkey a prominent destination for Syrian businesses, he says.

“We can go out on the streets here [in Mersin] at 3am and no one says anything to us. There are only problems between Turks and Syrians in places like Gaziantep, where there are a lot of Syrians.”

Protests have also taken place in the western Turkish city of Izmir, far from the Syrian border, with Syrian workers accused of undercutting local labourers. With more than a million Syrians thought to be in Turkey today, and many regional towns and cities ill-equipped to deal with the influx, relations are strained.

Recent government moves to assist Syrians have also sparked anger. Two weeks ago, Turkish media reported that a government plan to allow Turkish businesses hire Syrians and pay a small fraction of the social security amount normally paid for Turkish employees is on the table.

Some among Turkey’s main opposition party, the Republican People’s Party (CHP), oppose the integration of Syrians into Turkey’s workforce, fearing locals would lose out on employment opportunities. But its deputy chairman struck a conciliatory chord when speaking to The Irish Times.

“The CHP supports the provision of a decent way of life for all the Syrian refugees in Turkey. We have always drawn attention to the need to respect their rights and meet their needs as our guests,” said Faruk Logoglu.

Others in the CHP, which has opposed the Turkish government’s support for the Syrian political opposition since the beginning of the conflict, disagree.

“If [Syrians are granted work permits], then all the Syrians would rush to Turkey and hostility toward Syrians would increase further,” party deputy Hursit Gunes told local media.

What’s clear is that the war in Syria is likely to rumble on for months, even years. As it does the Syrians uprooted by the conflict are continuing to do what they can to get on with the new lives they have built.