Startup weekend: the revolution is here

These weekend warriors are brainstorming a new way of doing business 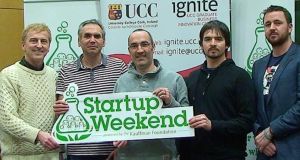 If you want to see the revolution in action, drop in to a Start-up Weekend event.

There’s a different kind of revolution happening in Ireland. The insurgents are armed with the belief that anything is possible – that an ordinary person can start a company and be globally successful.

The heroes of the revolution are creating jobs for their fellow citizens at an amazing rate: two-thirds of all new jobs in Ireland are now created by start-ups.

More than anything, it’s a cultural revolution that means that, for this generation, trying your hand at starting a company is as natural a career choice as joining the civil service or “the bank” was for previous generations.

If you want to see the revolution in action, drop in to a Startup Weekend event. These are hands-on experiences where aspiring entrepreneurs can find out if their start-up ideas will work.

Beginning Friday night, attendees bring their best ideas and try to persuade others to join their team. On Saturday and Sunday, teams focus on testing their ideas with customers and building a prototype version of the product. On Sunday evening, teams demonstrate their prototypes and receive valuable feedback from a panel of judges.

Fuelled by pizza and coffee, a group of strangers basically comes up with a proposal for a new business in 54 hours.

In November, Startup Weekend came to Ireland with events in Cork, Dublin, Galway and Limerick. More than 300 participants came up with more than 40 business proposals. An army of volunteers and mentors kept them fed and focused as they worked their way through the chaos to create something out of nothing.

John Breslin, one of the organisers in Galway, says: “The strength of the Startup Weekend is not in the technologies, but rather in the drive of the people who make it happen: the participants, who have the ambition and vision to be an entrepreneur; the mentors, who have enjoyed past successes and want to help others to make a success of their own; and the judges, who have seen more than a few good ideas – and people – in their time and have a fair idea of what it takes to have a winning team and concept.”

This spirit of volunteering is a central part of the culture change in Ireland. Sean O’Sullivan of SOS Ventures calls this “engaged citizenship: citizens giving of their time and ideas to promote the betterment of their peers”. What a powerful idea! What a contrast to the cronyism and cynicism we see in other parts of Irish life.

Gene Murphy, who seems to be at the centre of many start-up initiatives in Dublin, cites the example of one mentor, Roger Power, who not only travelled 3,300km from St Johns in Newfoundland but also organised a Startup Weekend in St Johns the weekend before!

Food entrepreneurs Gareth and Laura Chambers travelled from Newry, Co Down to mentor at the Limerick event. Mark Carey from eventual winners HeadFood credits the Chambers with the advice that moved them forward.

“Our team struggled for the first day and a half on what exactly our product was. There were general ideas but we were struggling to nail it down. This changed when we had a conversation with Gareth and Laura.

“Gareth is the general manager of Around Noon, a large producer of pre- packaged lunch products such as Scribbles.ie. And Laura owns Polkadot.ie, which produces fine food products for the café and food service market. They were fantastic. After some great feedback from them, we finally had a clear vision for the business plan.”

The experience can be life-changing for participants, says Emir Muñoz, a member of Startup Weekend Galway winner FriendShipIt. “The opportunity to gather people with lots of ideas, motivation and energy to create from scratch is enriching – and you may be surprised with the results. I advise you to consider that your life can change after a weekend”.

Clearly, events such as Startup Weekend can play a big role in spreading the new entrepreneurial culture in Ireland. Some 300 new weekend warriors are now armed with the tools and ambition to take that next step.

But what about our latest crop of Irish start-up revolutionaries? Will they take it further? Mick McDonnell from Cork winner Itamae is unambiguous: “We already have taken it further. Our idea has been submitted to the regional finals, and more than that, the whole team has already sat down together and started making plans for where to next.

“We are a very lucky team. We have a great mix of technical know-how, business savvy and communication skills. We really could take this team anywhere.”

Barry O’Sullivan is chief executive of Altocloud, a Silicon Valley-based start-up with a base in Galway