Who is in the driving seat here? Zappos or its employees? 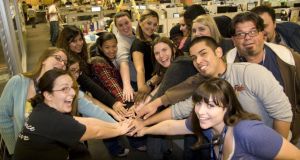 Zappos. com is a company that sells shoes over the internet. It is very successful. Sales last year were $1 billion. Its business is not built on some incredible new search algorithm. It has not discovered some amazing new disruptive technology to which Zappos and Zappos alone has the intellectual property rights. No. Zappos is a retailer of its own and other companies’ shoes over the internet. It is a subsidiary of Amazon.

In fact, Zappos’s two biggest competitive advantages – apart from price – seem to be that it is prepared to takes telephone calls from its customers at any time and is very quick at shipping stuff.

These are not breakthrough technologies. If you work at Zappos, you are more likely to be employed in a call centre, manned 24 hours a day all year round, or some other administrative role, than in its technology department.

Despite being definitely not a technology company, Zappos has developed its own turbo charged version of the tech start up/Google work environment in which the lines between work and personal life are blurred, usually to the advantage of the employer.

Its culture is defined in 10 bullet points. The first one is: “Deliver WOW through service.” The other nine are equally tedious and can enjoyed at http://jobs.zappos.com/life_at_zappos. If you visit the site you will see lots of pictures of what look like American high school kids celebrating the end of term. They are the staff.

And if you have the stomach for it, you should have a read of the Zappos 2012/13 Culture Book in which hundreds of employee testimonials are published.

Who is in the driving seat here? Zappos or its employees?

Has the average young American got such wildly unrealistic expectations of what a job should be that companies such as Zappos are forced to create an environment in which they must be cajoled into working with ice cream trucks and regular visits from live animals? Is a decent pay cheque, regular hours and health benefits no longer enough? Do they have to dress their very successful online shoe business in tech start-up clothes in order to keep these kids happy?

Alternatively you might be rather pleased with yourself. By throwing all this relatively cheap stuff at these kids you have convinced them that selling shoes over the phone for Zappos is much more than a call centre job; it is the same thing as working at Google. Some camel dung in the foyer is a small price to play for tricking these kids into thinking there is something cool about working the night shift.

When you look at your key metrics, such as staff retention and productivity, all this nonsense makes very good sense. Maybe you have to endure a desk that is exactly the same desk as any other Zappos’ employee – another part of the culture – but your bank balance is a different story.

The truth, as always, is somewhere in the middle and Zappos would seem to be a successful experiment in exporting the work culture that grew out of nerd-heavy companies such as Google into the wider business world.

How sustainable or really necessary the model is for businesses that are not built on employing anti-social technology geniuses capable of coming up with billion dollar ideas remains to be seen, but companies cannot ignore it.

On a recent trip to Seattle, the finalists of EY Entrepreneur of the Year programme heard Ray Conner, the head of Boeing’s commercial aircraft division acknowledging that Boeing was now having to adapt its hiring policies. The days when simply offering young engineers the chance to work with the best in their field on the most exciting projects in the aerospace industry attracted all the talent you needed are gone, he lamented.

The question is whether you really want to fly in a plane built by someone who won’t come to work unless they can bring their puppies and have ice cream.