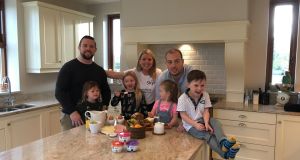 Edward Horgan, Claire Horgan and Paul Horgan of Horgans Delicatessen Supplies in Mitchelstown. “The Icelandic diet came in ranked first and one of the products that featured strongly in the diet was Skyr,” says Claire Horgan.

Everyone loves an underdog and the story of how Iceland, with just 320,000 inhabitants, captured the public’s imagination at the European Championships this summer led to the commonplace sight of Chinese, Peruvian and Turkish film crews traipsing around Reykjavik filing media reports on the “Icelandic miracle”.

Iceland has now attracted attention and the focus on the country is impacting economically.

Whether it’s coincidence or not, Skyr is now readily available in many Irish (and British and European) supermarkets.

The head of MS Dairies who produce Skyr, Agnar Fridriksson, says: “Success in football and success in Skyr sales? There’s no question there’s a positive relationship; the team has helped with marketing”.

But there is something deeper going on here than just a sporting association. The most recent United Nations’ Sustainable Development report ranks Iceland at the top of the list of the healthiest countries in the world because of its diet.

Because of its adverse climate, the country doesn’t yield that much fresh produce. But it excels in dairy and seafood. Iceland is one of the few countries in the developed world without a single branch of McDonalds and no general fast food culture.

The much-lauded Mediterranean diet is now under threat from globalisation, food marketing and changing lifestyles. There is now more focus on the fish and dairy rich Nordic diets.

Skyr is now dubbed “New York’s favourite yoghurt” after a blind-tasting carried out in the city featuring 12 different yoghurts by the Huffington Post.

It comes as a surprise to find that such a dairy-rich country as Ireland, was the first European country to introduce the product to its shops.

It’s because Claire Horgan from Horgan’s Delicatessen Supplies in Mitchelstown, Co Cork was watching a TV programme about the World’s Healthiest Diets a few years ago.

“The Icelandic Diet came in ranked first and one of the products that featured strongly in the diet was Skyr. I went about finding out more about it and was blown away by the online articles so the very next day I got in touch with MS Dairies in Iceland.”

Horgan’s launched Skyr in Dunnes Stores and then in Musgraves and independent retailers. They saw week on week growth in sales.

“The main challenge in this new launch was the product name itself and its pronunciation, which the Irish consumer had never heard before” says Horgan.

Help came from TV chef Rachel Allen who has an Icelandic mother and grew up on “bowls of Skyr”. Allen was all too willing to tell Irish consumers about her love of the product.

Skyr’s close association with the rampaging Icelandic football team certainly helps its marketing case. Consumers are no mugs and they’re not going to buy something because it’s a fashionable fad, but with the health links to the Icelandic diet there is more to back up the rise of Skyr than its links to football success.