Search tool promises ‘one screen and all the answers’ 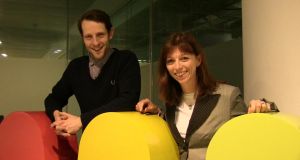 Despite a decade in which the internet, and how we access it, has evolved dramatically, SeeSearch co-creator Hilary Kenna notes that one thing has remained almost constant.

How we search and how our search results are presented to us.

“It’s predominantly text-based, and it hasn’t changed in a decade or more,” she says, an issue which caused a particular problem for the Dún Laoghaire Institute of Art, Design and Technology (IADT) lecturer while she worked on her PhD in screen typography a few years ago.

As “mainstream content on the web, academic journals or databases as well as subscription content” presented different tools of varying use, the process became so time-consuming and laborious, she decided there had to be a better way to gather relevant information.

“My background is in user experience design and I also have a particular interest in data visualisation, so I just thought it was an area that could benefit from a new application.

“The more I looked into it, I found there’s a lot of innovation, research and development that’s going on under the hood in relation to search and discovery but very little of it was manifested on the surface for the benefit of the user.”

Kenna then began 20 months of research into the subject at IADT after successfully applying for a commercialisation fund from Enterprise Ireland, before co-founding Vizolve with David Garvan, with the pair then spearheading the creation of the SeeSearch tool.

Based around a single-screen “personalised visual discovery channel”, Kenna assures that SeeSearch will save time and money when compared to trawling vast swathes of information from multiple web pages and indeed separate search engines.

It allows those in education and research to filter “millions of different content resources” into a tailored, single-screen response to meet their needs. Enterprises too, can utilise it to mine and gain value from their internal resources.

In addition, another target market – the retail industry – will be promised a user experience that shows more content (and content that is far more personally relevant) to their customers than any other search option on the market.

The company spun out from IADT last September, after finding new digs, mentorship and €40,000 in funding from the Telefónica-backed Wayra Academy in Dublin city centre.

Kenna and Garvan, now helped along by three full-time staff, two part-time workers and a number of contractors, believe there is a huge gap for their single-screen visual search user interface.

Says Kenna: “Creating a visually inviting, easy to digest” experience which produces results “hundreds of times more relevant” than is usually the case, has already led to plenty of interest from potential users as well as investors.

“We talked to 30 or 40 organisations across libraries, higher education and research sectors about their needs,” says Kenna, adding that education-focused and enterprise level pilot programmes for the product are currently being undertaken to enhance the offering before going to market.

As she and Garvan press the case for the product under the slogan of “one query, one screen, all the answers”, they have already collected further SeeSearch funding from Enterprise Ireland’s competitive start fund (CSF) in recent months as well.

While Vizolve intends to look for further SeeSearch funding to “scale and internationalise” a commercial product later this year, with the financial return for Kenna, Garvan and any investors based around an annual licence fee, as well as an end-to-end project model where they can “customise our discovery platform to suit an organisation’s needs”.

On a client-by-client basis, Kenna says: “The model would mean we’d go into an organisation and find out what their knowledge discovery needs are.

“That could be specific internal sources – and large organisations for instance will have multifarious silos of information – and also pull in specific lists of content they subscribe to, as well as open access content and unstructured resources they may subscribe to as well.”

Adds Kenna: “We can pull that all into one page where they can discover what they need in a visual manner which is very, very different to traditional search tools.”