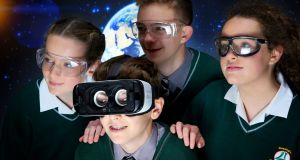 A new programme aiming to encourage second-level students to look at careers in science, technology, engineering or maths (Stem) is being rolled out to 2,000 pupils around Ireland.

Futurewize, which is targeting the junior cycle, is intended to highlight the career possibilities that Stem subjects open up. The project, create by Junior Achievement Ireland, is jointly sponsored by Science Foundation Ireland and industry partner Fidelity Investments.

Up to 80 business volunteers will work with the students in their own classrooms, once a week over a five-week programme. The Futurewize programme takes a more imaginative approach to the junior-cycle science course, linking in with its main strands: physical, biological and chemical worlds, along with Earth and space. Among some of its projects are creating a web page with HTML, and carrying out tests as part of a forensic investigation.

Although the project is open to all students, it is targeting 60 per cent female participation, and it has already piloted in some schools, including the Assumption Secondary School in Walkinstown in Dublin.

Among the schools already signed up to the programme are schools in Dublin, Cork, Waterford, Limerick, Galway and the Border counties. There are plans to roll that out further next year.

“What we try to do is inspire and motivate the students to see a future for themselves in the world of work by bringing industry volunteers into their own classrooms. That’s the formula we follow,” she said.

The programme’s ambassador is Dr Aoibhinn Ni Shúilleabháin, assistant professor in UCD’s School of Mathematics and Statistics. Dr Ni Shúilleabháin said the project would help students develop critical skills that could be applied outside the Stem industry, including critical and logical thinking.

However, she said the intention is not to push everyone into Stem careers, with Dr Ni Shúilleabháin describing the arts as “incredibly important”.

Steve Ashmore, head of technology services for Fidelity Investments, said the project also had benefits for the volunteers, who could develop their skills while communicating with the teenagers.

“I think what resonates with people is role models,” he said.

From our associates’ perspective, the job is not just about everything on a day-to-day basis, it’s often about what you do outside,” he said, adding that the different ways of learning that teenagers demonstrated could help the business volunteers.