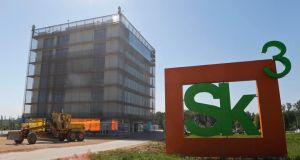 Taking shape: the Skolkovo Innovation Centre on the outskirts of Moscow which Russian President Vladimir Putin points to as an example of how Russia is diversifying its economy away from energy. Photograph: Maxim Shemetov/Reuters

The students at Skoltech are yet to have their own campus because it is still under construction, so the lecture was held at the Moscow School of Management, a long dreary journey from Moscow city centre by metro and then bus up a traffic-clogged road.

“By the spring of 2015 we will have some major laboratories working here at Skolkovo in all of our disciplinary areas,” said Skoltech president Edward Crawley, who is leading efforts to develop a university at Skolkovo, Russia’s answer to Silicon Valley, with partners such as US college Massachusetts Institute of Technology (MIT). Former Irish government minister Conor Lenihan has worked in senior positions with the Skolkovo Foundation for several years.

Russian President Vladimir Putin and other officials point to projects like Skolkovo as an example of how Russia is diversifying its economy away from energy. Other projects include Russia’s effort to develop Moscow as an international financial centre and to launch a state-backed private equity fund.

But at the start of Russia’s annual investment forum in St Petersburg last week, the environment for projects such as the Skolkovo tech park is deteriorating. Western sanctions over Ukraine are exacerbating Russia’s economic slowdown and giving foreign investors pause for thought.

For decades Russia has failed to deliver on promises to modernise an economy that is focused on extracting and exporting oil, metals and other commodities.

The chill in relations with the West following Russia’s annexation of Ukraine’s Crimean peninsula make a difficult task even harder.

“All these institutions and initiatives could only work as part of the broader Russian effort to become more integrated with the West,” said Steven Dashevsky, founder of hedge fund Dashevsky & Partners in London. “We’ve seen that movement grind to a halt effectively now.”

Big dreams For Skoltech students, the university is a gateway to the world, offering the chance to do placements with MIT and other colleges.

“Even a month at MIT is enough to open your eyes,” said Jelena Nadj, an IT masters student from Serbia speaking at Skolkovo’s Hypercube by the campus construction site, where tractors heave mounds of earth. “You change your attitude.”

The collaboration with MIT was launched in 2011. The US university is helping Skoltech to conceive and launch its graduate research university, which now has 63 masters students.

MIT said the Ukraine crisis had not affected the alliance.

That view is echoed by other Skoltech and Skolkovo partners contacted by Reuters.

The risk for Russia is that attracting new money becomes difficult, however.

The Russian government has pledged 170 billion roubles to Skolkovo, its press office said.

The project has also attracted commercial partners including US chip maker Intel, which said Skolkovo remains an important strategic partner.

Skoltech’s international partnerships, which alongside MIT include London’s Imperial College, Zurich’s ETH and the Hong Kong University of Science and Technology, are a major draw for students.

“The international experience is one of the biggest achievements of this place,” said Skoltech energy masters student Dmitry Smirnov, from Rybinsk, Russia. “Russia really needs international experience and to build to Europe and the Western world.” Reduced access Analysts say that Russia’s increasingly difficult relations with the West could result in reduced access to Western technology for projects such as Skolkovo.

“The chill between Russia and Western countries will undoubtedly diminish further the viability of the Skolkovo project,” said MIT professor of the history of science, Loren Graham.

In emailed remarks Graham also identified the typically Russian “top-down government-controlled” nature of the project as an obstacle to progress.

“The real problem with Skolkovo is not based on Western connections but with the nature of the enterprise from the beginning,” Graham said.

Sanctions backlash The deterioration of relations with the West has led to predictions that Russia may increase business with Asia or become more isolationist. China and Russia on Wednesday signed a $400 billion gas supply deal, opening up a new market for Moscow as it risks losing European customers.

In response to the West’s outcry over Ukraine, Russia has shown it is prepared to go it alone. It plans to set up a credit card payment system to rival Visa and Mastercard and is threatening to close US GPS satellite navigation system sites. “The worst case is we end up with isolationism and these organisations become sidelined and irrelevant and have a less clear future,” said Chris Weafer, senior partner with Moscow-based Macro-Advisory.

“You can get plenty of money in the Middle East and Asia but Russia needs partnerships with established companies with expertise and technology and those are mainly Western companies.”

The bulk of foreign funds to state-backed private equity fund the Russian Direct Investment Fund comes from the Middle East and Asia. The US government is asking U. firms to steer clear of Russia. Washington has told executives it is inappropriate to visit the St Petersburg forum this week. The event is closely associated with Putin, who usually delivers a keynote speech promoting Russia as a place to invest. One US executive whose firm is involved in major Russian state projects said his company was “caught between a rock and a hard place” and “laying low until the situation becomes clearer”.