Former competition regulator was proponent of taxi booker while in office 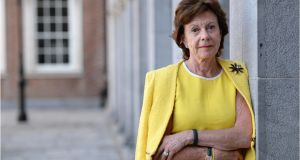 Uber, the disruptive taxi-booking operator, has recruited a host of senior advisers including former European commissioner Neelie Kroes to help it navigate the myriad political and regulatory roadblocks it faces around the world.

Ms Kroes, a former competition and telecoms regulator, was a vocal proponent for Uber while in office and a well-known critic of efforts to ban the company in countries including Germany.

She will now join a new public policy advisory board to help Uber fend off such challenges. Its other members range from Ray LaHood, former US transport secretary, to Princess Reema Bandar al-Saud, an advocate for women’s employment and mobility in Saudi Arabia.

In an interview with the Financial Times, Ms Kroes said that Uber still had plenty to learn.

“Uber needs to communicate in a very different way...They have to take into account that there are still differences in culture,” she said.

“Don’t think that everybody is attacking you.”

Uber’s taxi-booking services have run into repeated regulatory opposition since it began its rapid expansion three years ago, disrupting entrenched traditional cab services. It has faced bans, the arrest of executives, and civil and criminal lawsuits in multiple countries.

“Two years ago there hadn’t been a single new law or regulation passed in the world around ride-sharing,” said David Plouffe, an Uber board adviser who was previously campaign manager for President Barack Obama.

“Now there has been a lot of momentum,” he added, pointing to laws that have been passed in the US, Australia, the Philippines and Mexico, among other places.

Advisory board members will meet twice a year and be compensated with shares in Uber, which is valued at $62.5 billion (€55bn), making it the most valuable private start-up in the world.

In Europe, Ms Kroes’s move may raise questions about the revolving door between governments and companies, although it falls outside the 18-month cooling-off period required by law.

Ms Kroes, who left the European Commission in November 2014, dismissed these concerns. “I strongly believe in such positions, so it makes sense to give advice,” she said. “I prefer a seat in such a board, to a position outside looking in.”

Ms Kroes was a prominent supporter of Uber while she was at the commission, saying she was “outraged” when the Brussels city government banned Uber in 2014.

The commission is investigating several complaints from Uber that restrictions placed on its services in European cities violate European laws.

Uber also has support from current commissioners in Brussels. In an interview with the Financial Times last year, Jyrki Katainen, a commission vice-president, said that the struggle with Uber raised questions over whether some national rules were still fit for purpose in the digital age, comparing it to an attempt by horse riders to ban cars.