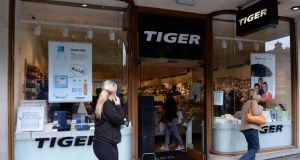 An Ikea-style line-up of oddball products including mustachioed wine-openers and fruit-shaped flip-flops has fueled the global expansion of Danish retailer Tiger, with three new stores a week supporting its owners’ ambitions for a stock market listing.

Tiger entered New York in May, and the discount homeware chain is focusing expansion on North America and Asia- Pacific after adding 124 stores in 2014. “I don’t see why we shouldn’t keep up expanding at this pace for the foreseeable future,” said chief executive Xavier Vidal, a Frenchman who joined in January. “We are not restrained by capital to keep expanding this fast.”

Tiger stores are typically packed with basket-toting customers snatching up gadgets they might have never imagined, such as designer colored bike locks and lime-green felt elephants. About 95 per cent of Tiger’s wares cost less than €15, putting them in the same league as companies like Ikea and Irish retailer Penneys/Primark.

“It’s about lifestyle shopping that exceeds just the basic needs,” said Mette Skovgaard Frich, an editor at Aarhus, Denmark-based Retail Institute Scandinavia. “They feed off a persisting trend of Nordic design and pricing that makes it easy to shop.”

Moody’s Investors Service forecasts modest sales growth in the region over the next 18 months, as economies in Spain, Portugal and Italy rebound.

Having started with one shop in Copenhagen 20 years ago, Tiger is now present in 26 countries and sells as many as 2,500 products. The stores were first called Zebra and later changed their name to Tiger, which pronounced in Danish, sounds similar to a word for 10 kroner. The common denominator of its products is colourful and inexpensive, according to Vidal.

The buyout firm generally aims to divest investments in four to five years. Yet EQT has no time frame for exiting Zebra as there’s still room to grow, Morten Hummelmose, head of EQT’s Danish equity team, said. “I would consider an IPO a realistic option,” Hummelmose said.