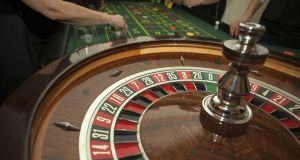 Two years ago, the Dublin Circuit Court ruled that Sayed Mirwais could not recover €11,713 that he said he won playing roulette from Automatic Amusements Ltd, which trades as D1 Casino on Dorset Street in the capital. Photograph: iStock

An independent arbitrator could have the power to rule on disputes between punters and bookies under a Government plan to modernise how gambling is regulated in the Republic.

The proposals, published on Wednesday, will boost protections for consumers and problem gamblers, while giving the €8 billion betting industry scope for further growth, if they become law, according to Alan Heuston, tax partner with solicitors’ firm McCann Fitzgerald.

Mr Heuston said the proposals include changing the law to make bets legally enforceable. Currently wagers are not legally binding contracts in the Republic, although they are in the UK.

“They will also look at having arbitration to deal with disputes between punters and operators,” he said. Mr Heuston, who heads McCann Fitzgerald’s betting and gaming group, added that this would offer consumers in dispute with gambling businesses an alternative to going to court.

Two years ago, the Dublin Circuit Court ruled that Sayed Mirwais could not recover €11,713 that he said he won playing roulette from Automatic Amusements Ltd, which trades as D1 Casino on Dorset Street in the capital.

Judge Francis Comerford told the plaintiff that current legislation, the Gaming and Lottery Act, 1956, did not allow him take any action for the money Mr Mirwais said he had won.

Mr Heuston said on Wednesday that Government proposals for an independent industry regulator and to have all gambling businesses offering bets here to be licensed would also bolster consumers’ rights and protections.

The lawyer pointed out that while the current law required bookies to have licences, companies offering online roulette and casino games did not need them. He added that to be licensed, businesses would have to comply with Irish law.

“For consumers this will ensure that only regulated operators who are complying with the legislation can be licensed,” Mr Heuston added. The betting industry will fund the regulator through its licence fees.

The report, drawn up by all 14 Government departments, the Attorney General’s office, Revenue and Garda, also proposes that the industry contributes to a social fund to offset the impact of problem gambling. “That could be used for treatment and training,” Mr Heuston said.

Other safeguards against problem gambling include a proposal to establish a “self-exclusion register” where those who fear they are at risk can place their details so operators can refuse to take their bets. Many companies already offer a voluntary version of this system.

Similarly, punters could register daily, weekly or monthly limits on the amounts they bet, while websites could be required to have pop-ups alerting customers who have spent long periods online.

Mr Heuston noted that big Irish operators, such as Paddy Power Betfair and Boylesports, employ thousands of people, while the overall industry here is worth between €6 billion and €8 billion.

“The proposed regulations look to balance protecting consumers and providing legitimate space for the industry to grow,” he said.