The end of packing cardboard boxes 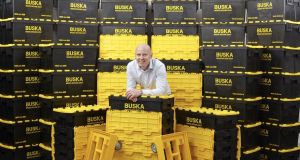 Mark Browne, founder and managing director of Buska: “I like knowing that the harder I work, the more successful my business is going to be.”

“I used to think to myself, there’s got to be a better way to approach this. This is what I considered to be a very real problem, and Buska is the solution,” said Browne.

Buska is an eco-friendly, convenient and cost-effective alternative to the traditional cardboard moving box which is not fit for purpose, according to Browne.

The company delivers plastic, stackable, nestable moving boxes complete with a four- wheeled moving dolly. The boxes can be stacked in the dolly and easily moved down an elevator and into a waiting van.

The price to rent Buska boxes starts at €89.18 for 10 boxes for a week, with delivery and collection organised by the company from the website buska.ie.

Browne previously spent almost a decade working in the document destruction industry, as a senior manager for Cyclone Shredding.

“The thing about document destruction is that you shred paper for your clients and over the course of the year you realise that you’ve shredded 2,000 tonnes of paper,” he said. Browne had been working on Buska for the past three years. “Trying to realise an ambition from its concept stage right through to reality while holding down a full-time job is immensely challenging,” he said.

“I worked on it for the last three years solidly, taking it from the point of wouldn’t it be great if this could happen, to here we are: warehouse, website, trading, customers and soon-to-be salespeople if I can keep growing it the way it’s growing,” he said.

He frequently worked for up to 12 hours in the office, before going home and working for four hours on Buska to keep it moving. “I had to set up the website with the ecommerce side of things as well as get my head around social media, marketing, Google adverts and analytics, all while trying to do a full-time job.”

Browne said one of his main concerns was establishing a strong brand for Buska to go hand-in-hand with a quality service. “Every Irish person knows Buska is the Irish for box. If you did franchise the business outside of Ireland, if you asked someone to spell the word ‘buska’ they’d spell it b-u-s-k-a,” he said.

The company started trading in November 2014 and Browne has been giving it all of his time since last September. His next ambition is expansion across the Republic and Northern Ireland.

“In the next six to 12 months, my ambition is to open offices in Cork, Galway, potentially in Limerick and certainly in Belfast before a longer-term ambition of franchising the business model and bringing it into the UK,” he said.

Browne has also set his sights on Europe and has already acquired one influential customer. The European Commission currently has 600 Buska boxes in their facility in Meath being used during an office refurbishment.

What Browne enjoys the most about running his own business is the ability to make things happen. “I like knowing that the harder I work, the more successful my business is going to be, rather than somebody else’s business,” he said.