Forecourt retailer will soon be rebranded as Circle K 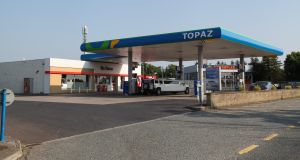 Topaz, which employs 2,000 people across 440 petrol stations, has annual turnover of about €3.5bn

A number of businesses aligned to the forecourt retailer Topaz, which is to rebrand shortly as Circle K, have reported mixed trading performances.

Topaz, which employs 2,000 people across 440 petrol stations and has annual turnover of about €3.5 billion, was acquired by listed Canadian company Alimentation Couche-Tard from businessman Denis O’Brien in a €258 million deal that was completed in early 2016.

The new parent invested more than €300 million in cash into the company last year as it transferred a number of global functions to Ireland.

Newly-filed accounts for the group show that one of its main units, Circle K Ireland Energy Group (formerly Topaz Energy Group), reported revenues of just €4.8 million for the 13 months ending April 2017, versus a restated €9.4 million for the prior year.

The slump in turnover came as the company, which has about 20 subsidiaries, bounced back from a €6.5 million pretax loss to a €1.5 million profit. Operating profits slipped to €1.8 million from €2.3 million over the reporting period.

Directors said they became aware that a capital investment made by its parent for €24.6 million the previous year was classified as amounts owing to related parties rather than an issue of share capital in an increase in share premium.

The accounts indicate the company had total assets of €274 million, unchanged from the prior year.

A third business, Circle K Holding Limited, which describes itself as an investment holding company, reported a €8.4 million pretax loss and a €2.2 million loss for the 17 months ending April 2017.

The company, which has 25 subsidiaries, said it had total assets of €56 million at the end of the reporting period.

A spokesman for Topaz said that Circle K Ireland does not file consolidated accounts. He added that the filings only refer to a certain part of the business, and do not give an overall picture of how the group is performing.

“As a business Topaz is extremely happy with levels of performance and progress made, and is looking forward to a successful 2018,” the spokesman said.