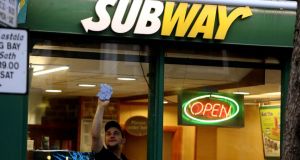 A Subway employee cleans the window of the shop on Parliament Street in Dublin’s city centre, as the sandwich chain has said it plans to open 180 new stores across Ireland over the next six years creating 1,800 jobs. Photograph: Brian Lawless/PA Wire

American fast food chain Subway has announced plans to increase its number of stores in Ireland by more than 180 over the next six years to about 300, which it says will create 1,800 new jobs.

About 400 of the jobs were previously announced for this year, with the sandwich chain investing €5 million in the opening of 40 new stores across the Republic over the next 12 months.

Last year, the sandwich chain opened 16 new stores throughout Ireland, including through its partnership with Applegreen. Subway has more outlets worldwide than McDonald’s, with more than 41,000 compared to the burger chain’s 34,000.

The brand, which oversees its Irish and British divisions as one unit, has expanded heavily throughout Europe throughout the financial crisis, opening 500 new outlets a year even at the height of the recession.

In addition to its 117 Irish outlets, it has about 1,500 in Britain, giving a European total of well over 4,000. It has identified Ireland and Britain as high- growth markets and is also working on an expansion in former Soviet bloc countries.

It markets its offering as being generally healthier than other fast-food chains, with sandwiches six inches or a foot long.

Subway operates in Ireland on a franchise model, with each outlet locally owned and operated using a strict operating template laid down by the parent brand.

Operators pay a fixed fee to Subway to buy the franchise, as well as a percentage of sales. In return they get access to its menus, procedures and marketing materials.

1 Columbia Sportswear defies gloom with first Irish standalone shop
2 Ireland faces 'deep downturn' this year and may not rebound until 2024 if there is a second wave
3 ‘The rental situation stops me moving back home’
4 Why are markets booming when a crash is on the way?
5 Home or car: what’s the best use of my savings?
6 Restaurants file court actions against insurers over lockdown losses
7 VAT cuts are for businesses – consumers will still pay the same
8 How much do Irish people earn? And what will Covid-19 do to our wages?
9 Second Covid-19 outbreak and no-deal Brexit an appalling vista
10 Could your old car be giving away all your secrets to its new owner?
Real news has value SUBSCRIBE