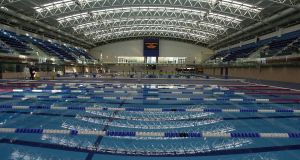 A State-owned company did not maliciously pursue a long and ultimately unsuccessful multi-million-euro legal battle over whether a company was liable for €10 million VAT on its lease for the National Aquatic Centre, the High Court has ruled.

Dublin Waterworld’s (DWW) grievances about financial and reputational damage caused by being implicated in litigation for which the lawyers involved get fully paid but it gets no payment or compensation despite ultimately winning the case are shared by all such litigants, Mr Justice Michael Twomey observed.

While the five-year delay before the Supreme Court granted DWW’s appeal in 2010 against a High Court decision finding DWW liable for the €10 million VAT was a significant factor in DWW’s loss, that delay, caused by lack of court resources to deal with the backlog of Supreme Court appeals, was not actionable, he said.

DWW sought damages arising from litigation dating back to 2005 in which State-owned Campus Stadium Ireland Development Ltd (CSID) alleged DWW was liable for VAT under its lease for the Abbotstown centre.

DWW then initiated a separate case against National Sports Campus Development Authority (NSCDA) – successor in title to CSID – over damage suffered as a consequence of the CSID case.

In a 20-day hearing, Mr Justice Twomey had to first decide if NSCDA had any liability to DWW over the CSID litigation.

In his judgment on Wednesday, the judge rejected DWW’s claims there was no reasonable or proper cause for the CSID litigation or that it was an abuse of court process.

He did so for reasons including an experienced arbitrator acting bona fide, along with the High Court, had found VAT was payable on the lease. No legal authority was put before him concerning whether a litigant who won at first instance and lost on appeal could be later found to have taken their case without reasonable or probable cause, he noted.

While he did not have to decide DWW’s additional claim, based on advice CSID received in 2005 from professional advisers and counsel, it had no reasonable or probable cause for litigation, he would have found CSID did have reasonable and probable cause, he said.

While the recommended approach to CSID was “not perfect” as it could not be guaranteed Price Waterhouse Cooper’s interpretation VAT was payable would be upheld by a court, that was still PWC’s professional advice.

CSID’s lawyers McCann Fitzgerald had advised it was arguable DWW was obliged to accept CSID’s decision VAT was payable while counsel advised CSID the claim for VAT should be included in CSID’s proceedings for lease forfeiture, he said

Although a “relatively junior” employee in PWC referred in an email sent to CSID to reliance being placed on “extra-statutory practice”, a partner in PWC advising CSID on the VAT issue also emailed CSID in the “most unequivocal terms” there was “no basis for KPMG/Dublin Waterworld to contend the lease is not subject to VAT”, the judge said.

This was a “long way” from telling a client in unequivocal terms, if they proceeded with litigation, they would not succeed.

It was difficult to avoid concluding the real focus of the disappointment John Moriarty of DWW appeared to have was really with the arbitrator and High Court for making what Mr Moriarty believed, with the benefit of the Supreme Court decision, were “blatantly obvious” errors, he said. Those were not actionable.

Earlier, he noted the Comptroller & Auditor General had queried in 2004 if a State-owned company, CSID, should incur further costs seeking to recover VAT when there was no net benefit to the State in having the NAC lease subject to VAT. The Minister for Sport later said CSID should pursue a case to have DWW forfeit the NAC lease and also take legal advice whether the VAT issue should be included. On counsel’s advice, the VAT issue was pursued.

The case was adjourned to later this month to allow the parties time to consider the judgment.

1 Up or down – how much is your Local Property Tax this year?
2 Am I crazy to consider switching to an Ulster Bank mortgage?
3 PTSB sells €1.4bn of buy-to-let mortgages to Citigroup
4 How much state pension will I get next year?
5 Brexit to curb services trade with UK, accountants group warns
6 CRH sells Brazilian cement business for $218m
7 Mortgage drawdowns fall by almost a third compared to 2019
8 HSBC to overhaul business model as profit tumbles 35%
9 Oxford Covid vaccine trials offer hope for elderly
10 Tesco takes to the skies with home delivery by drone
Real news has value SUBSCRIBE