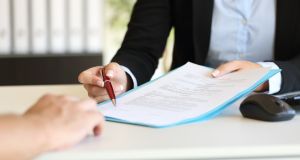 The Law Society has stepped up its criticism of the Companies Registration Office’s scaled-back servicing of filings during the Covid-19 crisis.

The legal body said it is creating “an unacceptable risk” for business transactions upon which its members are advising. It said it is having a “significant impact” on deals, which were being “delayed or deferred” because transactors could not trust whether the filings of companies involved were up to date.

Michele O’Boyle, the president of the Law Society, on Thursday wrote to Maureen O’Sullivan, the State’s registrar of companies, laying out a serious of criticisms. Ms O’Boyle last month wrote to the Government with similar criticisms.

The Law Society wants the CRO to outline the full extent of the backlog of company filings that has built up since the crisis hit. The CRO could not be directly reached for comment on Friday.

Ms O’Boyle complained that solicitors’ corporate clients that are engaged in ongoing deals “cannot rely on the [CRO] searches given that registrations may not have been processed”.

“This is causing significant concerns for practitioners and unacceptable risk for buyers and investors, and closings and business transactions are delayed or deferred as a result, at a time when as many normal economy transactions as can be completed ought not to be impeded,” she wrote.

The Law Society complained that it does not appear possible currently to register changes of directorship and that this should be addressed as a “priority”. It also said its members were unable to register court orders regarding capital restructurings, and this should be treated as a “matter of urgency”.

It said delays in registering new business names could potentially hold up the worldwide rebrandings of multinationals. It also asked for the CRO to pause company strike-offs, including involuntary actions “to avoid prejudicing parties that may be prevented from bringing filings up to date”.

In her letter to the Government last month, Ms O’Boyle wrote that the limited CRO service was causing “a lot of concern in the solicitors’ profession and amongst our clients as ongoing commercial activity does require some level of function”.

The State promised to catch up on the backlog once the CRO is fully operational again.