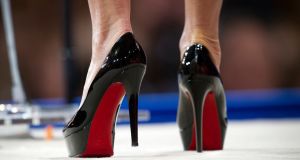 French shoe designer Christian Louboutin has won a decisive victory in the European Court of Justice in an intellectual property case relating to its signature red soles, which is likely to set a precedent for the brand and the luxury industry across Europe.

The case centred on the technicalities of European trademark law, notably whether a trademark that consists of a colour applied to the sole of a high-heeled shoe consists exclusively of a shape – and therefore cannot be protected as a registered mark – or whether it is a position mark, something Christian Louboutin has always maintained.

The European Court of Justice ruled on Tuesday that the legal regime governing shape trademarks does not apply to Christian Louboutin’s red sole mark, and said that the red colour applied on the sole of a women’s high heel shoe is a position mark.

“The mark does not relate to a specific shape of sole for high-heeled shoes since the description of that mark explicitly states that the contour of the shoe does not form part of the mark and is intended purely to show the positioning of the red colour covered by the registration,” the ECJ said in a statement.

The decisiveness of Tuesday’s judgment came as a surprise because the EU’s advocate general had previously ruled that the red soles could not be protected as they relate to a shape, which does not fall under the remit of the EU’s trademark laws.

Christian Louboutin welcomed the judgment. “Our trademark will be strong and we will be able to better enforce our intellectual property rights across Europe,” Xavier Ragot, the group’s general counsel, he said. “This will put an end to the discussion around what constitutes the Christian Louboutin trademark. It’s a position mark, not a shape mark.”

Christian Louboutin’s distinctive soles, in Pantone-18 Chinese Red, came about by accident while the designer was working on a prototype. He saw an assistant painting her nails and was inspired to take the bottle of nail varnish from her and paint the underside of a pair of shoes. Since he created his signature red soles 26 years ago they have become synonymous with the brand and its creator.

“The fashion and luxury goods industry will welcome this victory for Louboutin, in particular brands which rely on specific colours, colour combinations or patterns placed on products as a badge of origin,” said Elaine O’Hare, a partner at law firm Stevens & Bolton. “It may encourage brands to try to trademark other colours for shoes and other products.”

The ECJ ruling came after Christian Louboutin took legal action in the Netherlands to stop Van Haren, a Dutch high street chain, from selling its own design of stiletto shoes with red soles. The case will now be referred back to The Hague Court, which will deliver a final ruling on the matter based on the ECJ decision. “It seems likely that Louboutin will be allowed to develop a monopoly for red-soled high-heeled shoes,” said Ms O’Hare.

Christian Louboutin has fought dozens of intellectual property cases in the past. Tuesday’s judgment followed a separate ruling last month in the same vein by the French Paris Court of Appeal, which validated Christian Louboutin’s trademark rights to the signature red sole. It concerned a legal battle between the designer and leather goods company Kesslord, which offered similar models in France.