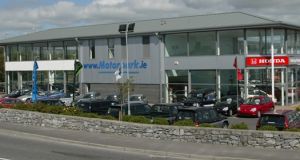 Sheils will lease the current premises at Motorpark on the Headford Road in Galway, but intends to move to a new location in the city in the near future

West of Ireland dealer network, the Sheils Motor Group, is to take over the MotorPark Group in Galway, becoming the biggest Ford dealership in Ireland by area and the country’s biggest Honda dealer group.

The move will see annual turnover at the Sheils Motor Group double to €50 million on sales of 2,500 cars, while staff numbers will also double to 80 employees. While owner Thomas Sheils refused to disclose the price of the takeover, it is believed to be in the region of €5 million.

With outlets in Ennis and Limerick city at present, Sheils will lease the current premises at Motorpark on the Headford Road in Galway, but intends to move to a new location in the city in the near future.

Mr Sheils told The Irish Times he is considering the opportunity of working with other Galway city dealers to create a multi-dealer motor retail park, similar to Airside in Swords, Co Dublin.

Mr Shiels said he is delighted with the deal, particularly as it brings together two long-established west of Ireland Ford dealerships. MotorPark in Galway previously traded under the Higgins name, and has held a Ford franchise since 1912, while Sheils first became a Ford dealer in 1925 under Thomas’s grandfather.

As to the future of dealerships, Mr Sheils says only the largest dealers will survive as the market moves online and to alternative sales channels. However, he says there will always be a need for a dealership in cities like Galway.