Patisserie Valerie chief resigns from board of Restaurant Group 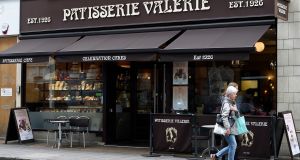 Patisserie Holdings chief executive Paul May has stepped down as a non-executive director at Restaurant Group.

The boss of Patisserie Valerie has resigned from the board of Restaurant Group in order to focus on his role at the cafe chain which just days earlier unearthed a major hole in its accounts.

A stock market announcement on Monday confirmed that Patisserie Holdings chief executive Paul May “has decided to step down” as a non-executive director at Restaurant Group “with immediate effect”.

A spokesperson for Patisserie Holdings, which has two outlets in the Republc, confirmed that Mr May was leaving the role in order to focus on his position at the cafe and cakes business.

Patisserie chairman Luke Johnson, who swooped in with a rescue package on Friday, told the Press Association last week that he was “going to redouble my own involvement in the business to protect my investments and that of other shareholders and stakeholders generally”.

He also pledged to “beef up” its systems and controls, and “make some additions to the senior leadership, particularly in finance”.

Mark Brumby, an analyst at Langton Capital said it was “not clear” whether Mr May “jumped or was pushed” but “has plenty of work to be doing at Patisserie Valerie in the near term”.

The company’s future was thrown into question last week after it uncovered fraudulent activity around its financial accounts and was served a wind-up order by the taxman over £1.14 million owed to HM Revenue & Customs.

Patisserie Holdings chairman Luke Johnson was later forced to swoop in with a rescue package that saw him pledge up to £20 million in new loans for the business.

The move saved nearly 3,000 jobs and the wider company from collapse.

In a statement issued to the market on Friday afternoon, Patisserie Holdings said the loans would enable it to continue trading for the “foreseeable future”.

Directors said that an initial investigation showed that historical statements on the cash position of the company were misstated and subject to fraudulent activity and accounting irregularities, directors said.

The group’s finance director Chris Marsh, who was suspended from his role last week, has since been arrested on suspicion of fraud, but was later released.

The Serious Fraud Office has now opened a criminal investigation.

Patisserie Holdings – which owns additional brands such as Druckers, Philpotts and Baker & Spice – trades from more than 200 stores and also has a partnership with Sainsbury’s, with branded counters present in the supermarket. – PA