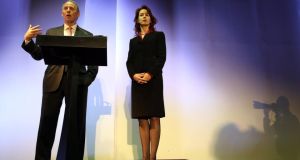 Supported by US foreign affairs expert Dr Meghan O’Sullivan (right), Dr Richard Haass (left) is attempting to find consensus on the troublesome issues in Northern Ireland of flags and emblems ; , parades ; and dealing with the legacy of the past. Photograph: Paul Faith/PA Wire

Sectarian flashpoints where much of Northern Ireland’s violence has happened need more investment, traders have said.

Rioting in Belfast following the decision to restrict the flying of the Union flag at Belfast City Hall crippled businesses in the run-up to Christmas last year, which was followed by further unrest linked to the loyalist marching season.

A body which represents independent retailers met former US diplomat Dr Richard Haass today as he seeks a resolution on parades, flags and dealing with the past.

Chief executive Glyn Roberts said: “Resolving issues around the past, parades, flags and identity are essential if we are to move our economy forward.

“Divided societies are bad for business and will limit the economic potential of Northern Ireland. Economic issues need to be part of these talks and are a critical element of a shared future.

“Some of the worst poverty, unemployment and dereliction can be found on both sides of interfaces and we outlined the need for greater investment in those areas as part of wider strategy.”

Some of the so-called peace lines - walls which separate Catholic from Protestant communities - remain sites of tension. Ardoyne in North Belfast has been at the centre of annual riots linked to a loyal order parade through the contested area and associated republican protests.

The trouble has spilled over into the city centre, with serious rioting on Royal Avenue, a major commercial thoroughfare. Flag protests were held earlier in the year at the City Hall, threatening to create a no-go area for shoppers.

Business organisation the CBI estimated the flag protests cost the retail industry up to £15 million (€17.8 million) in lost trade. It is unclear how many potential tourists and investors were deterred by scenes of violence.

In a joint statement they said: “The bottom line is that most businesses, particularly in the service sector, depend on people coming through the door, and this is where the greatest and most immediate support is needed.

“We need to capitalise on great initiatives such as Backin’ Belfast and ensure that one of the key economic drivers of our economy is protected and enhanced.

“The work of Richard Haass and his team here is vitally important because it shows that Northern Ireland is serious about working together and continuing to move forward, and must compete as an international tourist destination. Our hospitality and retail sectors are central to making that aspiration a reality.”

Dr Haass, who was envoy to Northern Ireland during George Bush’s presidency in 2001-03, is chairing a new political talks initiative aimed at resolving three of the most divisive issues facing the power-sharing institutions at Stormont.

Supported by US foreign affairs expert Dr Meghan O’Sullivan, he is attempting to find consensus on the troublesome issues of flags and emblems, parades and dealing with the legacy of the past.

He has acknowledged that a troubled summer in Northern Ireland, when simmering community tensions boiled over into street disorder on a number of occasions, was indicative of the urgency around finding an agreed way forward.

Dr Haass met parties which make up the coalition government executive separately this week. He is due to chair a plenary session involving all five parties tomorrow.

1 Coronavirus: Property rental in the jaws of the epidemic
2 I want to change my will quickly in case I fall ill. Do I need a lawyer?
3 Collison brothers worth an estimated €2.9bn each
4 WhatsApp limits message forwarding to slow spread of misinformation
5 Kerry fintech Taxamo agrees deal with Deloitte
6 Central Bank freeing up rainy day money could facilitate up to €16 billion in lending
7 Irish back pain medical device group to pull stock market listings
8 Purchase limits eased at supermarkets as trading levels ‘consistent’
9 EU finance ministers hope to thrash out Covid-19 recovery plan
10 Who is Gabriel Makhlouf, Central Bank governor in waiting?
Real news has value SUBSCRIBE