Result blamed on over-expansion in China 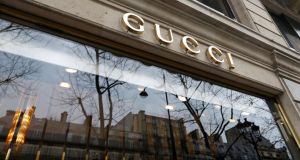 Gucci’s performance is likely to reinforce concerns among investors about the long-term growth prospects of mega- brands. Photograph: Chris Ratcliffe/Bloomberg

Sales growth at Italian luxury brand Gucci almost ground to a halt in the fourth quarter, hit by over-expansion in China where demand weakened and a painful upmarket repositioning.

Its performance is likely to reinforce concerns among investors about the long-term growth prospects of mega- brands such as Gucci and LVMH’s Louis Vuitton as consumers increasingly favour newer, more niche labels.

Sales growth at Gucci, which accounts for more than half of Kering’s market value, fell to 0.2 per cent in the three months to December 31st at constant currencies from 0.6 per cent in the previous quarter while analysts had expected an improvement.

In the 2000s, Gucci and Louis Vuitton milked demand for designer logo products with price tags in the hundreds of euro, and boosted growth by opening shops at breakneck speed in new markets such as China, Russia and the Middle East.

In response to signs of consumer fatigue with logo-heavy products, Gucci and Louis Vuitton strengthened their higher-end offering with more logo-discreet leather bags and fewer canvas totes. But the brands say the strategy took its toll on sales.

Kering chief executive Francois-Henri Pinault today argued Gucci’s slowdown was self-inflicted and mainly due to its repositioning and clean-up of the brand’s retail network.

“Of course, if I want to increase Gucci’s sales by 10 per cent, I can just open the tap for entry-level price products and everything will fly off the shelf,” Mr Pinault said. “But it would be very dangerous for the exclusivity of the brand.” – Reuters