Retailers offering plenty of choice as they line up to list 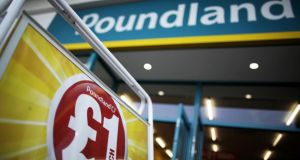 Discount retailers are well represented in the dozen of British retailers lining up IPOs in coming months. For Poundland, the price tag is put at about £800 million.Photograph: Matthew Lloyd/ Bloomberg via Getty Images

Britain’s privately-owned retailers are scrambling to list on the London stock market, with more than a dozen lining up initial public offerings (IPOs) in the coming months.

Among the high street names in the multibillion- pound queue to capitalise on the economic recovery is House of Fraser, the department store chain that recently abandoned talks with French rival Galeries Lafayette.

Analysts reckon the company, which reported strong trading over the Christmas period, will be priced at about £350 million (€423 million).

Discount retailers are well represented, having enjoyed strong growth throughout the recession, with Poundland and B&M Bargains both working on flotations. A listing for B&M would bring former Tesco boss Sir Terry Leahy, who chairs the company, back into the City spotlight. It would also be one of the biggest of the retail IPOs, with analysts suggesting a valuation of about £2 billion. For Poundland, the price tag is put at about £800 million.

Another sizeable company readying itself for the market is AO.com – Appliances Online – which specialises in dishwashers and tumble dryers and could command a price tag of £1.2 billion.

Russian group
The total valuation of companies rushing to list is now well beyond £10 billion – and it’s not just British companies. Russian hypermarket group Lenta has indicated its intention to go public via a dual listing in London and Moscow.

The business is estimated to be worth £3 billion and is expected to tap investors for a chunky £600 million.

With fund managers reluctant to pour too much cash into a single sector, it is unlikely all retailers wanting to float will be successful.

The advantage should lie with those who get away early, such as McColl’s, the newsagent and convenience store operator.

McColl’s raced to the head of the queue by becoming the first retailer to confirm its plans to float last month. The 1,250- strong store group aims to raise about £50 million in an IPO in the coming weeks, with a valuation £225 million.

Judged by analysts to be a solid, if somewhat unexciting company, McColl’s should go down well in the City, assuming it does not fall into the trap of over-pricing its shares.

With such a frenzy to float, the temptation for owners of the businesses – private equity firms for the most part – is to push valuations. But investors in the retail sector have not forgotten the dismal performance of Debenhams, which floated at 195p a share in 2006 and is now trading at little more than 70p a share after a series of profit warnings.

Ocado
And with so much choice, investors can afford to be selective. What they want is another Asos. When the online fashion retailer made its market debut in 2001, it was valued at just £12 million. Now it’s worth more than £5 billion.

The City remains polarised on Ocado, the online grocery group that floated in the summer of 2010. In the 14 years since it was founded by three former Goldman Sachs bankers, Ocado has never made a profit; bears of the stock say it never will. Despite that, the business is valued at almost £3 billion.

Results released showed losses for the year to December 1st widened to £12.5 million, a substantial increase on the £600,000 loss recorded the previous year.

Chief executive Tim Steiner is still confident and has high hopes for its recent tie-up with the supermarkets chain Morrison’s. He also hopes to sell the Ocado formula abroad.

News of the departure of co-founder Jason Gissing means Steiner will be the last of the founders to remain. So, if Ocado does eventually succeed, then at least Steiner will get all the credit.

1 BOI customers to be charged twice with bank fees on New Year’s Eve
2 Irish designer of Oxford vaccine : ‘I’ve never worked so hard in my life’
3 Covid-19 will worsen housing affordability, report warns
4 Being polite in work emails is more important than ever
5 Chris Johns: I think we are on the cusp of an economic boom
6 Irish boss of Qantas says Covid vaccines will be mandatory
7 Goldman Sachs advises NatWest on Ulster Bank review
8 Modern’chief executive officer offloads another $1.74m in shares
9 Irish whiskey and Irish cream to get special status in China
10 Microsoft to create 200 jobs at new €27m engineering hub in Dublin
Real news has value SUBSCRIBE