Group plans to open new Irish outlets and increase staff to up to 1,000 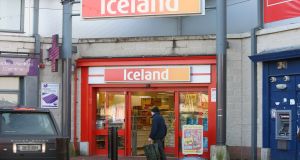 Iceland branch in Cabra: Accounts say it continued to trade successfully and that three stores opened and one closed, during the year to the end of March. Photograph: Niall Carson/PA Wire

Iceland Stores Ireland, the operator of the Iceland retail chain in the Republic, recorded turnover of €16.4 million in the year to the end of March last, compared with €4.56 million over the five months to the end of March 2014. The company is looking to continue expansion of its store network.

The company began trading in November of 2013, when its UK parent took over from the former franchisee of its outlets in this jurisdiction, ACCHL, previously known as Aim Cash & Carry.

Accounts just filed for Iceland Stores say it continued to trade successfully and that three stores opened and one closed, during the year to the end of March: “Further stores are being sought for the current year.”

The group has eight outlets, four in Dublin. A request for a comment from the group met with no response.

While gross profit for the year was €4.4 million, up from €1 million in the previous period, administrative expenses in the most recent year were €7.4 million. There is no explanation in the accounts as to what these costs were.

Last year, the founder of the UK group, Malcolm Walker, said he envisaged the group opening a significant number of new Irish outlets over the coming period and growing its number of employees here to up to 1,000. “We think there is a good opportunity for us in Ireland,” he said.

The average number of people employed during the year was 145, up from 97 over the previous period, and employment costs were €2.4 million.