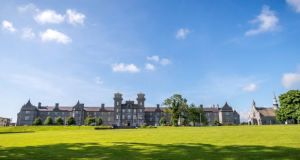 A High Court case brought by the general manager of a Co Sligo hotel against his employer over an alleged flawed internal disciplinary hearing has been resolved.

The matter was returned before the court on Friday when Ms Justice Leonie Reynolds was told, following talks, the parties had come to an agreement.

As part of the settlement, it has been agreed that fresh internal disciplinary proceedings, to be conducted before a new chairperson, into the allegations against Mr Ryan will start next month.

It was also agreed that the injunction, which was obtained on an ex parte (one side only represented) basis, could be vacated; that Mr Ryan was entitled to his costs of the injunction application; and the action could be struck out.

In seeking the injunction, Mr Ryan, represented by Patrick O Reilly SC and Eoin O’Shea BL, instructed by solicitor Barry Creed, had argued the disciplinary hearing, which commenced in October, was so flawed that it was doomed.

Issues had arisen over the testimony of two employees at the hotel called as witnesses for the company in the hearing.

Those men had, the court heard, given statements alleging they were pressurised into saying something they had not.

It was claimed that, despite objections on behalf of Mr Ryan, the chairperson of the internal investigation had decided to proceed with the hearing. As a result, Mr Ryan and his lawyers withdrew from the process.

Mr Ryan, who has worked in the hotel industry for 28 years and with Dalata since 2014, had claimed disciplinary proceedings were commenced against him earlier this year after he declined offers from his employer to leave his role.

The court heard that Mr Ryan is accused of paying former employees from petty cash to do a day’s work in the hotel’s restaurant when the premises was short-staffed. The payments, which totalled €300, were all vouched for.

He is also accused of paying two hotel porter staff €70 each to monitor entry to the hotel’s lobby when there was a major security operation in Sligo. Those payments were also vouched.

It is claimed the cash payments breached company policy and that the two staff had been asked to work as security guards, which they were not qualified to do.

Mr Ryan said the men were asked to keep a lookout for any trouble, and if anything happened they were instructed to lock the doors and call gardaí, but were not asked by him to provide security.