Study by Centre for Retail Research warns 62,000 shops will fold in next five years 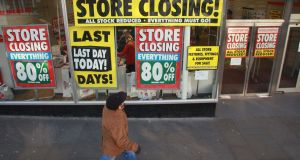 More than one in five of Britain’s high street shops could close by 2018 as more customers turn to the internet for their shopping, new research claims.

The study, carried out by the Centre for Retail Research,warned that 62,000 shops would fold in the next five years.

The UK independent retail analysis group estimated that around 316,000 workers would lose their jobs as a result of the downturn in high street shopping.

Online shopping currently accounts for 12.7 per cent of retail spending. However, this is expected to surge to 22 per cent by 2018.

Professor Joshua Bamfield’s report said the first closures will be pharmacies and health and beauty stores, followed by those selling music, books, cards, stationery and gifts, as well as DIY outlets.

“If no action is taken, store vacancy rates could almost double to 24 per cent. Already this year, 16 major retailers have gone into administration operating 1,985 shops and employing 14,719 staff.”