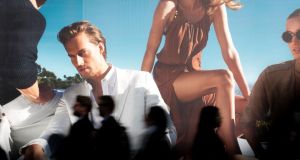 Inditex, the Spanish owner of the Zara clothing chain, reported its slowest profit growth in five years, as global currency fluctuations weighed on sales. Net income rose less than 1 per cent to €2.38 billion euros in the 12 months through January, Europe’s biggest clothing retailer said in a statement today.

Sales advanced 8 per cent at constant rates of exchange while comparable revenue rose 3 per cent.

Inditex has been capturing growth by expanding its online operations and adding stores in countries like Brazil, China and Russia to help offset sluggish spending at home. Weakening emerging-market currencies have led companies including Adidas to warn that the fluctuations will hurt earnings this year.

“From here, we regard Inditex as one of the few beneficiaries of the ongoing, rapid channel shift to online from store-based apparel sales given that store-based sales cannibalization remains minimal,” Richard Edwards, an analyst at Citigroup said.

Inditex shares have dropped 14 per cent this year, giving the Arteixo, Spain-based retailer a market value of about €64 billion.

Inditex, which has increased profit every year since its 2001 initial public offering, has built its popularity on the ability to bring new products from design table to stores in as little as two weeks. That’s helped the company offset the economic crisis that gripped its home market for years. The company has almost a third of its 6,340 stores in its home market.

That agility has helped Inditex outpace Swedish rival Hennes and Mauritz AB, which reported an 11 per cent increase in February sales this week. Store sales this fiscal year have have increased by 12 per cent in local currencies, Inditex said.