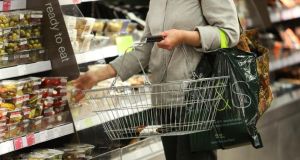 The data also indicated sales rose by 6.8 per cent on an annual basis. Photographer: Chris Ratcliffe/Bloomberg

Retail sales fell by 0.9 per cent last month - the third largest monthly fall in over a year - as sales of cars, pharmaceuticals, books and newspapers all declined.

The latest set of figures from the Central Statistic Office (CSO) showed, however, that if volatile car sales are excluded the volume of sales on the high street rose by 1.6 per cent on a monthly basis.

The data also indicated sales rose by 6.8 per cent on an annual basis.

A breakdown of the CSO figures showed the sector with the largest monthly decline was motor trades, where sales dropped 3.8 per cent.

Sales of pharmaceuticals, medical and cosmetic articles were also down by 2.2 per cent, while sales of books, newspapers and stationery fell by 1.5 per cent.

On the upside, sales of furniture and lighting sales rose by 6.4 per cent in April, while hardware, paint and glass sales grew by 3.3 per cent, and sales of food, beverages and tobacco increased by 2.4 per cent.

In value terms, there was a decrease of 0.8 per cent in retail sales in April when compared with the previous month, and an annual increase of 4.4 per cent.

If motor trades are excluded, there was a monthly increase of 1.5 per cent in the value of sales and an annual increase of 2.8 per cent.

Ibec group Retail Ireland said the figures were encouraging and would hopefully lead to continued growth for the rest of the year.

“While the figures for the first quarter of 2014 were disappointing, April’s numbers are much stronger. Retail Ireland is forecasting growth in consumer spending of around 2 per cent this year and today’s data supports this,” Retail Ireland director Stephen Lynam said.

“There was an increase in April in the sales in supermarkets and department stores and in the sale of fuel, clothing, furniture and hardware.”

“The continued double digit growth in furniture and lighting sales is indicative of a stronger property market. April’s increase of over 20 per cent is hugely welcome by a sector of retail that has had a torrid few years.”

“There were, however, falls in sales in specialised food shops like butchers and bakers, and in book stores, highlighting continued difficulties for those sectors.”