Pick up in sales growth at clothing retailer Inditex 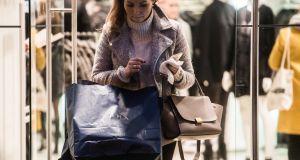 A shopper carries a branded shopping bag as she exits a Zara store. Photograph: Akos Stiller/Bloomberg

Revenue rose 15 per cent excluding currency shifts in the nine months through October and continued at that rate in the start of the final quarter, the Arteixo, Spain-based owner of the Zara and Stradivarius brands said Thursday in a statement.

Net income gained 20 per cent to €2. billionin the nine months, matching the average of estimates compiled by Bloomberg.

The company is benefiting from growing demand in Spain, where Inditex gets about a fifth of its revenue. The country’s October clothing retail sales were the strongest in at least six years, according to Barclays.

The rebound contrasts with the rest of Europe, as Fitch Ratings lowered its outlook for the region’s retail sector to negative on Wednesday, citing rising competition and “fragile” consumer spending.

“The reason Inditex is trading strongly is that the company has focused hard on value and range,” Anne Critchlow, an analyst at Societe Generale, said . “Value for money is very strong, particularly at Zara, while the choice of products has become wider. It’s an extremely good proposition.”

Inditex shares have gained 37 per cent this year, boosting the company’s market value to more than €100 billion. Founder Amancio Ortega is the world’s second-richest person, with a net worth of about $75 billion.

The retailer has opened about 400 stores annually on average over the past five years spread out among eight brands, reaching more than 6,900 total. This year’s introductions include its first shop in Hawaii and the first Bershka womenswear store in Taiwan. It has also added online sales in 28 of its 88 markets, having added Zara.com in Taiwan, Hong Kong and Macau.

10 US drugmaker raises cold remedy price by more than 300%