PayPoint to exit the Irish market in October

Company is used by 450 retailers in the Republic 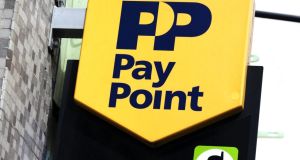 PayPoint entered the Irish market in 2003 when it signed an agreement with the ESB.

British payments company PayPoint is to leave the Irish market in October, the company has confirmed.

The London-listed company, which is used by more than 450 retailers in the Republic each week, said it had communicated its decision to retailers in May and July of this year.*

It said the decision to withdraw from the State was “in line with PayPoint’s Strategic priorities to focus on its UK and Romanian operations, which make up the vast majority of the network”.

“To confirm, PayPoint has taken the decision to leave the Irish market,” it said in a statement to The Irish Times. “This was communicated to retailers and clients in May and then again July this year; and operations will close in October 2018.

“Until then, it is very much business as usual and retailers and clients have been instructed to serve customers as normal. We will be in touch with further information closer to the time.”

PayPoint is an international provider of “convenient payments” and “value added services” to major consumer service organisations in a range of sectors. It is well known as a medium through which to top up mobile phones.

The sectors in which it has interests include energy pre and post-payment; telecoms; cable; housing; waste collection; media, financial services; retail; ecommerce; and the public sector.

PayPoint began trading in the UK in 1996, initially collecting cash payments for household bills and services through its network of convenience retailers.

The network has since grown to more than 50,000 convenience stores, newsagents, off-licences, supermarkets and garage forecourts across the UK, Ireland, and Romania.

It entered the Irish market in 2003 when it signed an agreement with the ESB to give its customers the option of paying their bill or buying their electricity tokens at PayPoint outlets.

Consequently, PayPoint rolled out a new network of agents in the Republic to collect these payments.

Bord Gáis, Airtricity, Eircom, Vodafone, O2 and Tesco soon joined the ESB and now more than 580 PayPoint outlets in the Republic collect cash payments on behalf of many household and service organisations.

It handles more than €11 billion annually from almost 570 million transactions annually for more than 6,000 clients and merchants.