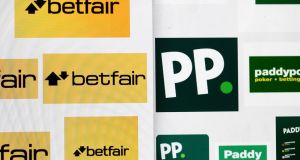 Competition authorities in both the UK and the Republic must approve the merger. Photograph: Bloomberg

Paddy Power’s proposed €8 billion merger with Betfair cleared a key hurdle yesterday when one of two competition regulators investigating the deal approved it.

The Irish bookie is planning to merge with its rival in a deal that will create one of the world’s biggest gambling businesses, with €2 billion in revenues and a stock market value estimated at €8 billion.

Yesterday, the UK’s Competition and Markets Authority (CMA) said it had “cleared the anticipated merger of Betfair Group plc and Paddy Power plc”.

The authority began its inquiry on November 9th and had until today, December 18th, to complete it. The decision means the CMA will not subject the deal to a longer, phase two investigation, which would have taken 90 working days.

The Republic’s Competition and Consumer Protection Commission must also give its blessing to the deal before it can go ahead. It is working on its phase one investigation and has yet to publish its decision.

It has up to 30 working days to complete a phase one inquiry, after which it can either approve a merger or opt to go to a phase two investigation, which could potentially take up to 90 working days.

News of the CMA’s decision comes ahead of extraordinary general meetings on Monday at which shareholders in both companies will vote on the proposal.

Under the terms of the all- share proposal, Paddy Power shareholders will own 52 per cent of the newly enlarged group and Betfair investors will receive 48 per cent. Both brands will remain after the transaction.

Betfair chief executive Breon Corcoran will take the helm at the new group, and Paddy Power chief executive Andy McCue will become its chief operating officer. Its headquarters will be in Dublin and it will have its primary stock market listing in London.