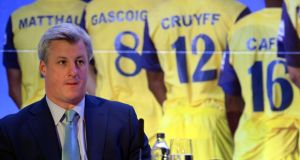 Bookmaker Paddy Power expects its customers to bet €160 million over the course of the football World Cup, which kicks off on June 12th and runs into the following month.

The company told shareholders in an interim management statement that a poor run of results in football, including one weekend in March which cost it €10 million, would hit returns for the first half of the year.

Its shares fell 4.35 per cent to close at €56.67, dragged down by both the statement and the news that chief executive Patrick Kennedy intends to leave the company in April 2015 after 10 years in charge.

However, it said revenue growth, clients recycling their winnings, favourable exchange rates and the later-than-expected introduction of betting tax for online and phone accounts in the Republic, should largely offset the impact of the negative results on the year as whole.

After its annual general meeting in Dublin yesterday, Mr Kennedy said that it expected betting turnover on World Cup 2014 to be double what it was for the 2010 tournament.

“We turned over approximately €80 million in 2010 on the World Cup and we would expect that to be at around €160 million this year,” he said. Much of its impact will be seen in the company’s first-half results, as the majority of the games will be played before the end of June.

Newest market
Mr Kennedy also noted that the tournament would play a big role in determining whether Paddy Power broke even in its newest market, Italy, by the end of this year. He said the competition was an enormous “one in- four-year opportunity to acquire customers” and so the group’s performance during it would give a strong indication of its prospects of breaking even in Italy this year.

Davy analysts David Jennings, Simon McGrotty and John Stokes suggested it was more likely to be 2015 before this happened. They also argued that Mr Kennedy’s announcement could create uncertainty that is likely to weigh heavily on the company’s share price.

He stressed that he intended to remain completely focused on the group over the next year, and also that no matter what he did next, he did not intend to compete against Paddy Power.

Successor
Chairman Nigel Northridge said it was too early to discuss Mr Kennedy’s successor. “This is day one of that process, having made the announcement this morning. We’ve got some very good internal people, we need to look outside as well as part of the process.”

The group is facing increased tax on the gaming machines in its British betting shops and a new point of consumption levy on online bets placed in that jurisdiction, at the end of the year.

Mr Kennedy said the industry was encouraging the Government and regulators to ensure that the new rules did not hand an advantage to illegal, untaxed operators.