Paddy Power and Betfair take a punt on globalised gambling

Divergent business models will help giant merger get past the regulators 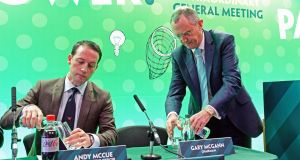 Paddy Power and Betfair are merging in a drive to scale up their businesses and cut costs as new taxes and regulation begin to take their toll on the increasingly globalised online gambling industry.

The Irish bookmaker is facing a 1 per cent tax on turnover on its online operations, which it has said would cost it an extra €6 million a year. At the same time, Betfair is paying 15 per cent of its revenues to the UK exchequer.

Joining forces will save them a combined €70 million annually once the deal is done and the merger is bedded down, they say. This would more than cover the cost of new taxes and regulation.

The enlarged company, Paddy Power Betfair, will be headquartered in Dublin, allowing it to benefit from the Republic’s 12.5 per cent tax on corporate profits. But it will have its main listing on the London Stock Exchange, giving it access to Europe’s biggest pool of investors.

Speaking after the meeting at which the owners of 99.99 per cent of Paddy Power voted for the merger, its chief executive, Andy McCue, explained that there are other factors at play as well.

“We think that, in particular, there are benefits from scale in online gambling,” he said. The combined company will have increased capacity to develop new betting products and to distribute them across more than four million active online customers in Europe, the US and Australia.

“Then there is the combination of the talent pools in both businesses,” Mr McCue said. “They are already the two strongest in the industry and this will make them stronger again.”

Ladbrokes and Gala Coral are planning a £2.3 billion tie-in, albeit in the teeth of opposition from one shareholder, Irish businessman Dermot Desmond. GVC and Bwin.party look likely to do a £900 million deal.

Paddy Power and Betfair began discussing their merger some time before announcing the plan in August, as early as Easter, according to some reports. A small group of executives from each company, totalling no more than half a dozen, were involved initially.

Both managements know each other, Betfair chief executive Breon Corcoran is a former head of operations at Paddy Power.

Shortly after taking the top job at Paddy Power at the start of this year, McCue said the group would focus on growing organically rather than through acquisition. As if to emphasise the point, it actually returned €392 million to its shareholders in March.

Reports say the two companies had individually looked to see if there were other businesses they could buy, but found nothing suitable. As result, Betfair began talks with its larger rival.

Paddy Power is a traditional bookmaker, offering odds against horseracing and other sports on which its punters bet. Betfair also offers this service, but its core business is a betting exchange. This matches clients who want to bet on a particular result at particular odds with those who who want to offer odds against its. Betfair takes a commission from the winner, and thus takes no risk itself.

They also believe that those differences will aid the merger in getting past the competition regulators whose approval it needs before going ahead. The UK’s Competition and Markets Authority has already given it the green light. The Republic’s Competition and Consumer Protection Commission has yet to rule. It is currently working on its phase one investigation, which it is due to complete early next year. It then has the option of clearing the merger or going to a longer, phase two inquiry.

Competition regulators’ investigations are designed to ensure that a merger does not limit normal competition in a particular market. The companies themselves argue that punters will benefit from product innovation and marketing.